Posted on March 27, 2019 by somethingisgoingtohappen

Nancy Novick—a freelance journalist who writes about health, medicine, and the arts—made her fiction debut in Ellery Queen’s Mystery Magazine in the September/October 2018 issue, with “How Does He Die This Time?” The story went on to win the 2019 Robert L. Fish Memorial Award for best short story by a new American writer. Readers who missed the tale in print can listen to it in EQMM’s podcast series here. The author is clearly well read in the genre in which she has achieved such a notable start. In this post she brings to light some lesser-known contributors to the field from the nineteenth century.—Janet Hutchings

Imagine that you are playing mystery trivia and are asked to guess the best-selling author of a short story set in Paris some 150 years ago. Your host offers the following summary:

Two young officers, Bergamo, an Austrian, and Rolande, a Frenchman, enter the rooms of the elderly Monsieur St. Pierre, with whom Bergamo has been gambling on a nightly basis in the company of the older man’s daughter, Leontine. Rolande suspects that foul play is behind his friend’s heavy losses and soon discovers that Leontine has been drugging Bergamo—impairing his ability to play with a mere wave of her fan. A confrontation with the young woman results in the poisoning suicide of one character and the despair of another.

Modern-day readers are unlikely to come up with the answer: A.M. Barnard. But most will be familiar with the true name of the creator of “Fate in a Fan,” Louisa May Alcott! 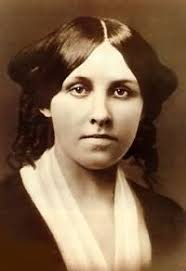 Alcott, of course, is best known by generations of readers as the author of Little Women, the classic tale of four young girls growing up in New England during and after the Civil War. In addition to providing an entertaining account of the family’s adventures and travails, Little Women and its sequels also taught lessons in self-sacrifice, humility, family loyalty, and ambition tempered by modesty. When the characters indulge in vanity or small acts of vindictiveness, they are visited by remorse, and tender apologies ensue. (That Alcott’s best-known work is infused with these values is not surprising given her close relationship with her father and teacher, Bronson Alcott, a noted Transcendentalist and friend of Emerson and Thoreau, who believed in the innate goodness of man.)

I think it is fair to say that Little Women is particularly notable for providing a role model in Jo March for generations of girls who wanted to write (the author of this post raises her hand). As devotees of the novel will recall, Jo experiences her first literary success writing sensational stories—in essence the gothic thrillers of her time. Alcott’s first commercial success was also as an author of what she called “sensation” or “blood and thunder” stories, when she won a magazine contest. Little was known about this phase of Alcott’s career until two rare book dealers, Madeleine B. Stern and Leona Rostenberg, connected the dots between the A.M. Barnard thrillers and Alcott in the early 1940s. And it wasn’t until 1975 that a collection of these works, Behind a Mask: The Unknown Thrillers of Louisa May Alcott, was published with full attribution to the author.

Replete with murders, blackmail, stabbings, and poisonings, the stories were a

revelation to fans of Alcott’s family-friendly works. In “Fatal Follies,” Alcott tells the story of a young couple, in which each partner mistakenly believes the other of having a monomania—a desire to kill their spouse—with tragic results.

“Behind a Mask: or, A Woman’s Power”—perhaps the best known of Alcott’s thrillers—begins with the arrival of a frail and charming young governess at an English estate. (Scholars point to the influence of Charlotte Brontë’s Jane Eyre.) Within a matter of pages the reader learns that all is not what it seems; the delicate nineteen-year-old is actually “a haggard, worn, and moody scheming woman of thirty at least.” Jean Muir is a divorced, failed actress from France, rather than the innocent orphan from Scotland that she represents herself to be, and has designs on the titled head of the family, the widowed uncle of her charge.

Muir achieves her end through a series of deceptions and by pitting the two young men of the family against each other in an episode that results in a near-fatal stabbing. Given what most of us know about Alcott, Muir’s “happy” ending is remarkable. Her protagonist, who embodies every quality the March girls were taught to eschew, is rewarded for her deceptions and manipulations. (Other Alcott thrillers touched on more provocative themes for the times, including sadomasochism, extramarital affairs, and drug addiction.)

Although Alcott’s two principal genres—wholesome stories and mysteries (the author also published poetry and autobiographical sketches)—contrast widely in tone, both may reflect her support for women’s rights and women’s empowerment. In fact, the author was the first woman to register to vote in her hometown of Concord, Massachusetts. While the March girls may have been groomed for marriage and the family hearth, the sisters are also taught to value education and the arts, and, as noted, Jo’s role as author was an integral part of the novel as her earnings helped pay the household bills. In her thrillers, Alcott’s female characters are often powerful, as in the case of Jean Muir, even when they are not virtuous—an exercise in A Woman’s Power, indeed. 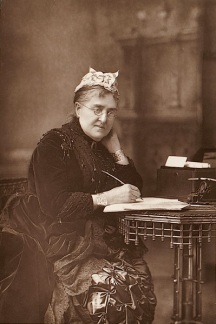 While Alcott was industriously writing story after story, and novel after novel, in the United States, another woman of strong convictions, the London-based Eliza Lynn Linton, an avowed antifeminist, journalist, and novelist was writing thrillers of her own. In one particularly gloomy tale, “The Family at Fenhouse”(originally published in the United States in Harper’s Weekly, along with an installment of Dickens Great Expectations), the unbecoming and unloved Jane Erfurt (Jane Eyre’s distant cousin?), describes her family: “My poor mother had been insane for many years before her death; one of my brothers was deaf and dumb, another was deformed, while none of us showed either health or vigor.”

Once again, the protagonist is a friendless servant, in this case a companion to the sickly wife of the household. In contrast to Jean Muir, things go from bad to worse for Jane, as she is verbally and physically abused by the man who hires her, as well as by his stepson. The story ends with her escape from the household but only after she has been framed for the stepson’s brutal murder and is branded a fugitive. Seeing herself described in posters as “a murderess and a maniac” Jane is left to a fate she describes in this way: “Seized with terror I fled: I fled like a wild being hunted and pursued, and have never rested since.”

The opening of “The Family at Fenhouse”

Women tend to have a bad time of it in Linton’s stories, as in “The Tenants of Hangman’s House,” in which an unhappily married woman is brought to the secluded eponymous house by the sea. Her sadistic husband takes in a shipwrecked “Spaniard” (who is, in fact, British) and further torments the wife by suggesting that he will give her to this “ruffian.” The Spaniard turns out to covet the wife as well and vows to save her form the brutal husband only if she will surrender to his advances. As the two men grapple at a cliff’s edge, and one falls to his death, the unfortunate heroine is killed in a fire set by her husband.

In “The Fate of Madame Cabanel,” a young Englishwoman (an orphan and a former governess!) newly wed to an older man of status is brought to his home in a small town in Brittany. The young woman with notably rosy red lips flourishes as her husband goes into a decline along with many of the townspeople, including little Adolphe, the nephew of Adele, Monsieur Cabanel’s housekeeper and former mistress. Adolphe is, in fact, Monsieur Cabanel’s son with Adele. While the plot is melodramatic and relies heavily on the ignorant and superstitious beliefs of the townspeople—the doomed heroine is rumored to be a vampire—Linton does provide a compelling portrait of mob psychology. Unfortunately for Madame C, reason prevails too late to save her, little Adolphe dies, and the embittered Adele leaps to her death into a deep pit.

It’s interesting to note that Linton’s biographers describe the author as a successful, independent woman, who bore little resemblance to the victims in her thrillers. She was an autodidact who took full advantage of her widowed father’s library and moved to London as a young woman to become a professional writer. She was married briefly to a political radical, William James Linton, from whom she is reported to have parted on amicable terms and from all accounts, happily resumed her single life.

The reading public apparently had an appetite for both Linton’s journalism as well as her thrillers, several of which were published in Charles Dickens’ publications, Household Words and All the Year Round. Linton had an additional connection with Dickens—he purchased his home, Gad’s Hill, from her—as well as with other literary lights of the time including the poet Walter Landor, who championed her career. Linton was the first woman journalist to draw a salary in England. She was also the author of a controversial essay, “The Girl of the Period,” in which she decries the habits of modern young women—immodesty and use of slang were cardinal sins—and mourns the loss of the traditional aspirations of young Englishwomen, to become “her husband’s friend and companion, but never his rival; one who would consider his interests as identical with her own.”

Accounts of Linton’s life suggest that she became increasingly conservative in her views as she aged, yet there’s no evidence that she ever regretted writing her thrillers, which contributed to her independent lifestyle. However, it is interesting to note that many were published under the name E. Lynn Linton, perhaps to distance these works from her journalistic writing. Alcott’s ambivalence about her sensation stories, however, is well documented. In a letter to a friend Alcott wrote, “I think my natural ambitions is for the lurid style. I indulge in gorgeous fancies and wish that I dare inscribe them upon my pages and set them before the public.” In Little Women, Jo wins a hundred dollars when she submits a sensation story to a publisher who is holding a contest, a fortune to the Marches, but is told by her father that she can do better. Later, Jo’s suitor, Professor Bhaer, calls sensation stories “poison”. Viewing her work anew, Jo shoves her bundle of stories into the fire and resolves to write no more of them.

Still, it’s hard to know how Alcott ultimately viewed these works; she also seemed to tire of the wholesome novels she penned. In a somewhat astonishing passage at the end of her third and final book about the March family, Jo’s Boys, she wrote: “It is a strong temptation to the weary historian to close the present tale with an earthquake which should engulf Plumfield and its environs so deeply in the bowels of the earth that no youthful Schliemann could ever find a vestige of it. But as that somewhat melodramatic conclusion might shock my gentle readers, I will refrain . . .”

Fortunately, contemporary women writers of crime fiction are rarely subjected to the moral judgments of others, but the fact that Linton’s crime stories are largely forgotten and that Alcott felt compelled to publish her thrillers under an androgynous pen name raises an interesting question about the past. While we may assume that the gender equity crime writers now enjoy is a relatively new development, how many more literary ladies of the nineteenth century—whose names are now lost to us—were penning the thrillers of their time?