Posted on May 8, 2019 by somethingisgoingtohappen

Spring of 2019 turned out to be a very special awards season for the Dell mystery magazines. Not only were our Readers Award winners all graduates of EQMM’s Department of First Stories, EQMM stories won both the Edgar Allan Poe Award for best short story and the Robert L. Fish Award for best short story by a new American writer. At the heart of the festivities was the selection of our colleague, Linda Landrigan, editor of our sister publication, Alfred Hitchcock’s Mystery Magazine, for the Ellery Queen Award, given by the Mystery Writers of America to outstanding people in the mystery-publishing industry. We’ll let pictures tell most of the story, but I’d like to touch on a few of the highlights of my experiences this year.

BTW, readers who missed this year’s Readers Award–winning stories when they were published in the magazine should soon be able to find them (for listening) in our podcast series. Stacy Woodson’s first-place story, “Duty, Honor, Hammett,” is remarkable for being only the second First story ever to come first in Readers Award voting. Stacy is a military vet and often takes up military themes in her fiction. That was the case with “Duty, Honor, Hammett,” from our November/December 2018 issue. The story combines little-known military ritual with taut suspense and a bit of mystery-genre history that I had not previously known.

Josh Pachter’s debut in our Department of First Stories occurred exactly fifty years before publication (in our November/December 2018 issue) of the story that took second place for the Readers Award this year. At sixteen, Josh was the second youngest person ever to be published in EQMM. In celebration of the 50th anniversary of that extraordinary event, he wrote a story entitled “50,” which brought back the characters from his first story. In addition to the many memorable stories Josh has contributed to our magazine and to numerous anthologies (now numbering nearly one hundred) Josh has been invaluable to EQMM as a translator from Flemish and Dutch and other languages, and as an anthologist of EQMM material. It was therefore very satisfying to all of us to see him recognized by our readers!

David Dean, who debuted in our Department of First Stories in 1990, is a repeat Readers Award winner. In third place this year, he has previously come in first and second. In recent years, David has frequently taken up the theme of what he calls “feral children” in his fiction—that is, children left to fend for themselves in contemporary suburban America. His third-place story “Sofee” (from our March/April 2018 issue) belongs to that group of stories. It’s moving, sad, and terrifyingly suspenseful—and it provides some food for thought as well. As I mentioned, we hope to have all of these stories available on podcast soon, so stay tuned.

We had the good fortune this year to have all of our Readers Award winners present at our annual pre-Edgars party, where the Readers Awards are given. Many of the photos that follow are from that party, including some of each Readers Award winner. I made some new aquaintances at the party this year—people I’d only known through correspondence, including a few writers who will make their first appearance in EQMM in 2019 like Mark Stevens, Leslie Elman, Cecilia Fulton, and Jackie Freimor, and Laird Blackwell, whose latest book is one scholars and EQMM fans alike will want to read: Frederic Dannay, Ellery Queen’s Mystery Magazine, and the Art of the Detective Story.

The culminating event of Edgars week, the Edgar Allan Poe Awards banquet, followed close on our party. Linda Landrigan’s eloquent acceptance of the Ellery Queen Award was one highlight of the night; another was Doug Allyn’s presentation of the Fish Award to Nancy Novick for her story “How Does He Die This Time?” (originally published in our September/October 2018 issue and currently available in our podcast series) and yet another (the first unknown, and quite a thrill!) the announcement that Art Taylor (who also got his start in EQMM’s Department of First Stories) had won the Edgar for “English 398: Fiction Workshop,” from the July/August 2018 EQMM and now in our podcast series. I blogged about Nancy’s and Art’s stories earlier on this site, so I’ll direct you there if you want a hint of what they’re about before listening to the podcasts.

A week after the Edgars, we were off to the Malice Domestic convention. There I met up with a lot of old friends, and again, made a few new aquaintances—notable among them Edith Maxwell, one of the convention’s Agatha Award nominees for best historical novel, who will have her first short story in EQMM soon. At the same afternoon event where I had the pleasure of chatting with Edith, I caught up with Edwin Hill, another EQMM Department of First Story-er, who was up for the Agatha for best first novel, and Barb Goffman, a multiple Agatha nominee and past Agatha winner who was up for the best short story Agatha for her EQMM (November/December 2018) debut “Bug Appétit”—one of the best holiday stories I have ever read (listen to her podcast of it!).

In one of the most suspenseful twists of the Malice Domestic convention, Art Taylor and his wife Tara Laskowski were both up for the Agatha Award for best short story, Art for his Edgar winning EQMM story “English 398: Fiction Workshop,” and Tara for her AHMM story “The Case of the Vanishing Professor” (AHMM May/June 2018). As it turned out, the voting resulted in a tie—the first ever!—though not between Tara and Art, between Tara and Leslie Budewitz, for the latter’s AHMM story “All God’s Sparrows (AHMM May/June 2018). Tara and Leslie are both also contributors to EQMM, Tara with a story coming up next month. What a delight to see them honored—and also for the first double short-story Agatha to go to AHMM in a year honoring the magazine’s editor, Linda Landrigan.

After a breakfast with close colleagues of the magazine—Doug Greene and Jeffrey Marks of Crippen & Landru, the most important publisher of single-author mystery short-story collections (often drawn from Dell Magazines’archives); EQMM’s book reviewer Steve Steinbock; our translator (and fiction contributor) Josh Pachter; one of the genre’s first short-story blog-site creators, James Lincoln Warren (also a fiction contributor), and my colleagues Linda Landrigan and the invaluable associate editor Jackie Sherbow (who, among many other things, recorded podcasts for us of Michael Bracken and Edith Maxwell at the convention), it was time to depart. Another April/May awards season over, but one we’ll remember!

All black and white photos are by Ché Ryback. 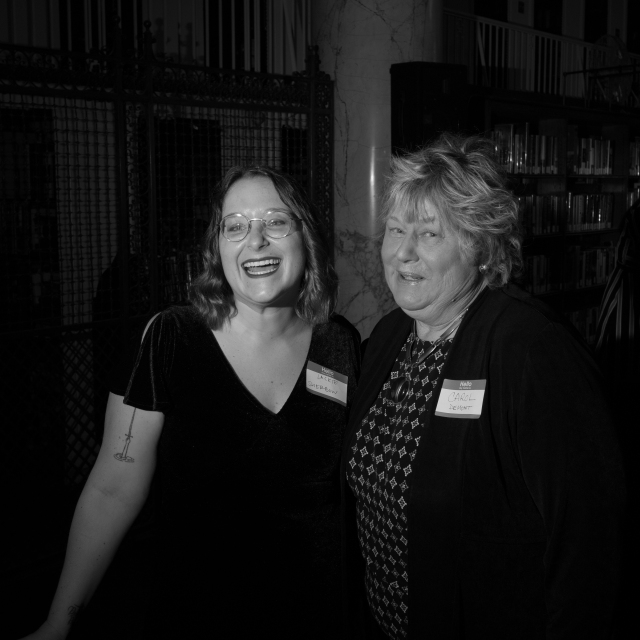 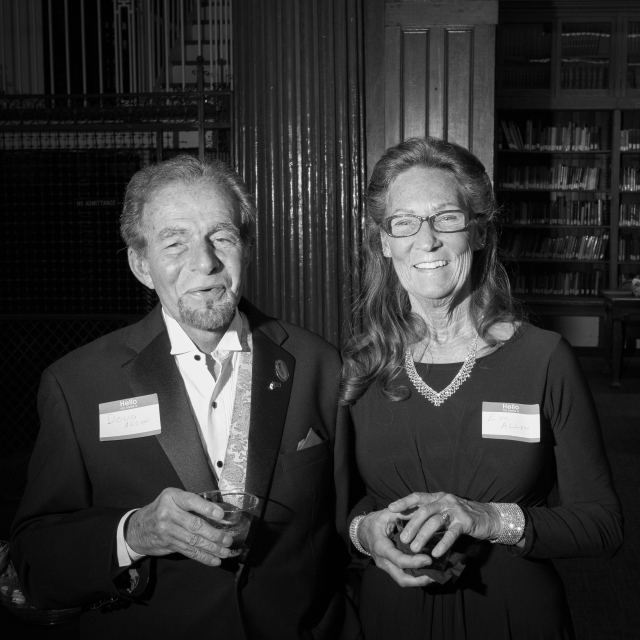 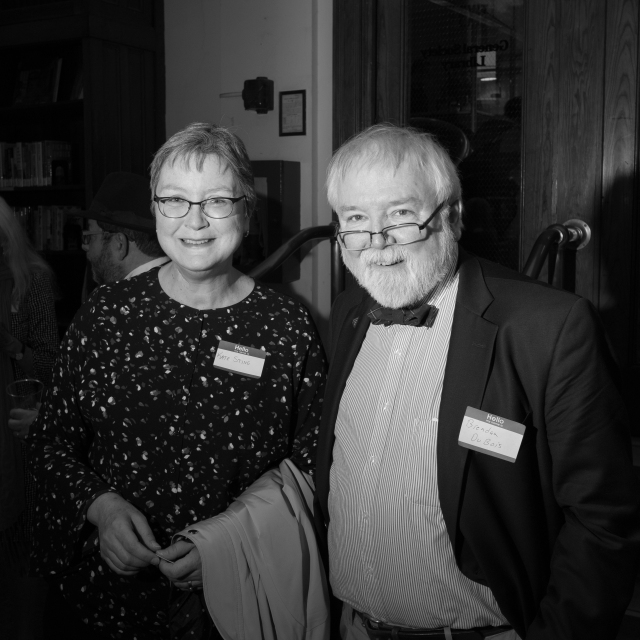 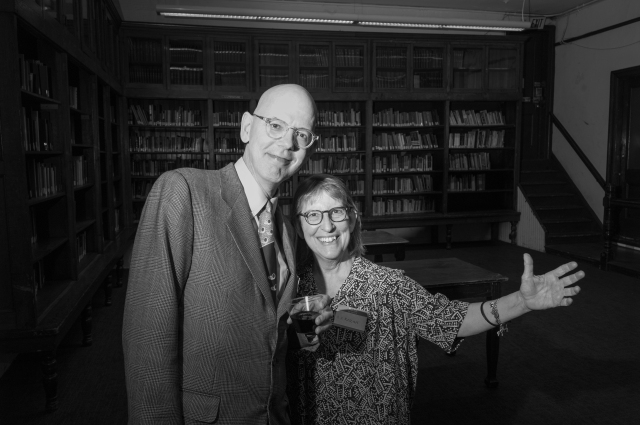 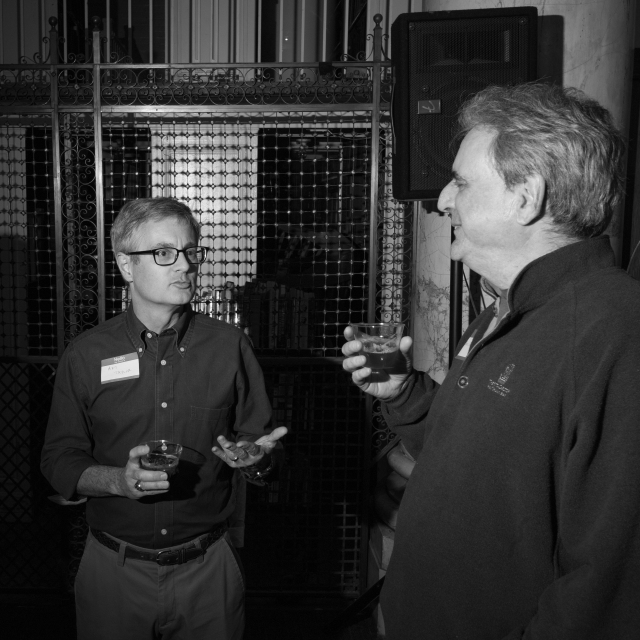 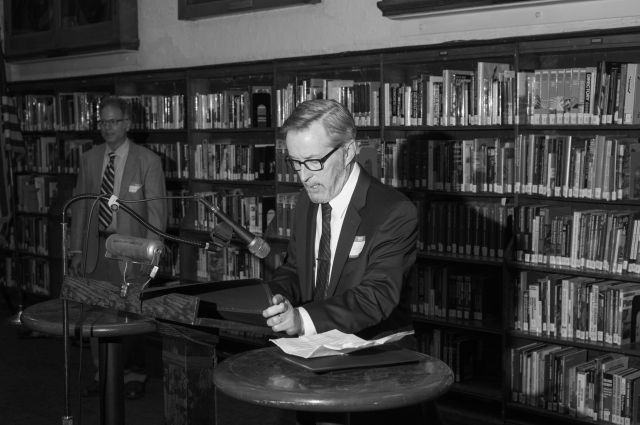 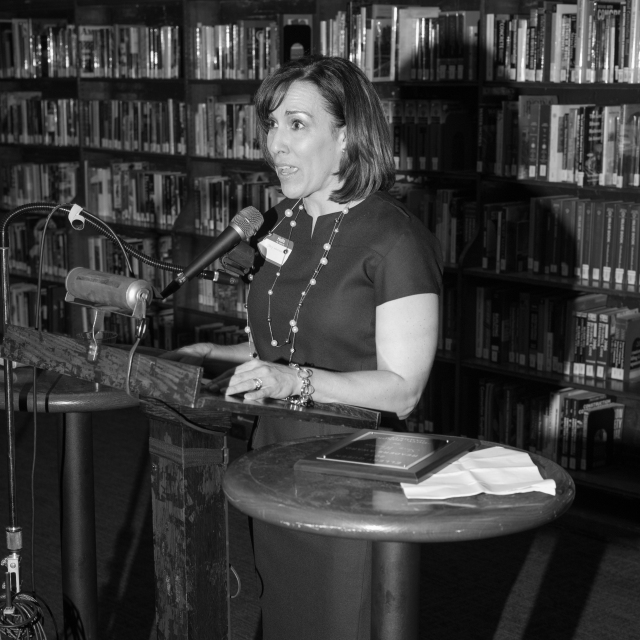 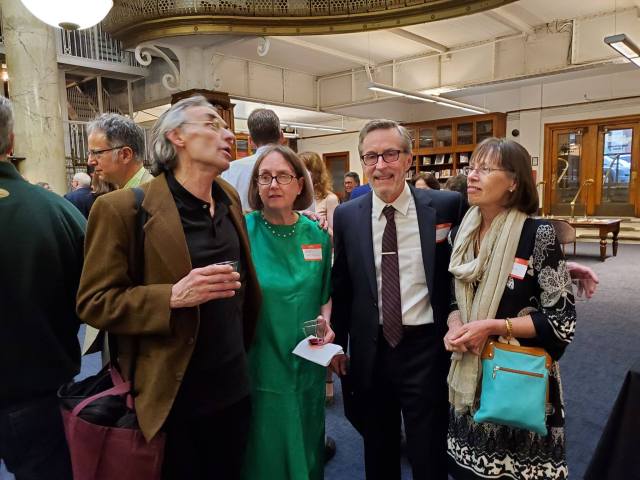 Art Taylor with his Edgar Award 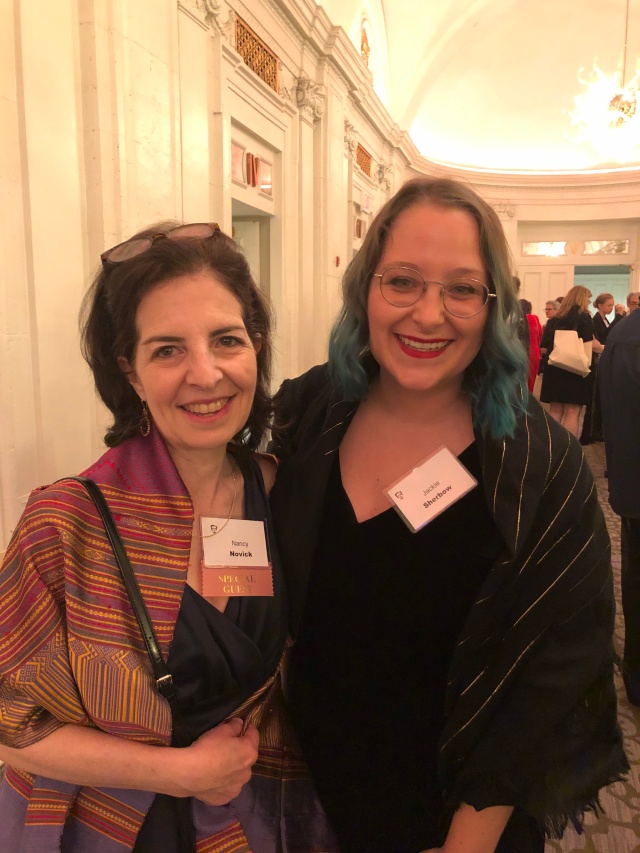 Michael Bracken recording his story for our podcast series

Edit Maxwell recording her story for our podcast series 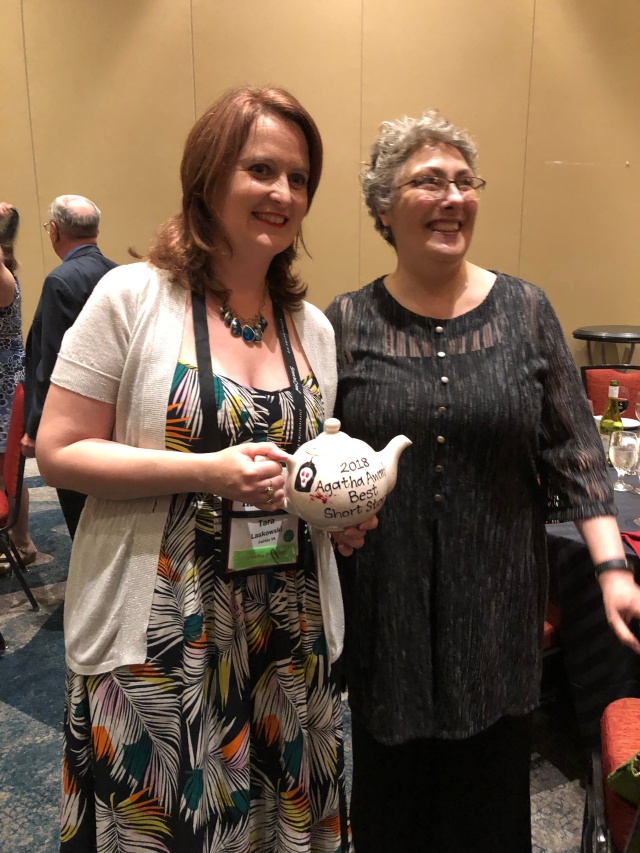