Posted on December 12, 2018 by somethingisgoingtohappen 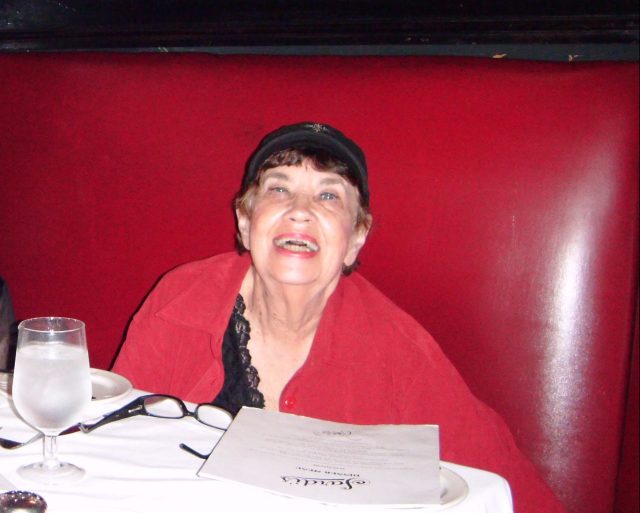 On November 26, Mary Frisque, Executive Director of the International Association of Crime Writers, North America, died after a brief illness. My friendship with Mary goes back a couple of decades. I met her through Edward D. Hoch and his wife Patricia. As any regular reader of EQMM will know, Ed, a Grand Master of the MWA, was EQMM’s most prolific contributor, with a story in every issue of the magazine for over thirty years. Whenever Ed and Pat came to New York City from Rochester (as they did several times each year), they’d take me out to dinner. Mary was often another guest at those splendid meals, and soon Mary and I began meeting for dinner on other occasions, often at an Irish pub, or at Uncle Nick’s, near Penn Station. It saddens me that our last Uncle Nick’s dinner was nearly two years ago now. We hadn’t lost touch—it was just that something always came up that got in the way. And then, suddenly, Mary was gone.

It doesn’t surprise me that Mary didn’t want people to know she was in hospital. I only learned of it through short-story writer Linda Kerslake, a relative of Mary’s by marriage. (An only child, Mary had no other relatives.) Mary was a true woman of mystery, in so many ways. She was brilliant and very well educated, but never tooted her own horn; as a result, she often didn’t get the notice she deserved. The International Association of Crime Writers was the perfect place for her; she had a graduate degree in Russian language and literature, and already knew a great deal about the literature of many parts of the world, but especially Russia and Eastern Europe. I’m not sure what piqued her interest in crime fiction. It could have been that when she first came to New York from her native Washington State, she found a job running the office of the Mystery Writers of America. That was in the late seventies or early eighties.

By the time I met Mary, she seemed to know just about everyone in the mystery community—which is one of the unfathomable things about her. She was essentially a loner, and abhorred parties or gatherings larger than a few close friends, but she managed to connect with everyone in some way, often by letter or card, later by e-mail. She loved jazz and she was a very good dancer. One of my best memories of Mary is the afternoon during one Edgars week when she lured me and John and Barbara Lutz and several other authors from out of town to the Roseland Ballroom to trip the light fantastic. It was a blast! Mary’s friend and fellow IACW member, Jim Weikart, reminded me of another of Mary’s hobbies. “She also liked to gamble,” he said, “a hobby (not an addiction) that we shared. I remember her telling me about a trip she and Doris Cassiday made up to Connecticut, I think to Foxwoods, and how much fun it was. I once knew someone who won Quartermania at a casino and Mary always joked about finding venues for our IACW meeting that would have Quartermania. At one Bouchercon, maybe Colorado, we skipped out for an afternoon and drove to a local casino where she played slots and I blackjack. She thought it was a hoot. I don’t think either of us came away winners. But it was a good time.”

Mary had a serious side too. Any job she undertook, she did well. She was an indefatigable and invaluable resource to EQMM. I can’t count the number of times she contacted me to let me know about something important that was going on in our field or to tell me about a wonderful new author she’d just read. I often followed up on her suggestions, especially when it came to writers from overseas. Mary was incredibly well read; I can’t recall ever mentioning an author whose work she didn’t know. And she had very distinct opinions about them all! I doubt that the launch of the Passport to Crime department in EQMM, in which we publish a story in translation every issue, would have been as successful as it was without Mary’s generous outpouring of help. It was she who put us in touch with her friend Mary Tannert, a translator from German who has worked with EQMM for years now, bringing us English versions of the yearly winners of Germany’s prestigious Glauser Prize.

I am not the only one in the mystery world who found Mary’s knowledge and dedication both inspiring and a great asset. An officer of the International Association of Crime Writers, Jim Weikart tells me, “Mary was the heart and soul of IACW and we are scrambling to replace her.”

Despite all that Mary contributed to our field, quietly and unobtrusively, she never had the kind of high-profile job in crime fiction that generally leads to receipt of the field’s top awards for publishing professionals. Nevertheless, I wish she would receive some kind of award, posthumously, in order to ensure that her contribution to the field is not forgotten.

This will be my last post until the new year. We lost some good friends of the magazine in 2018. I will be raising a glass in their memory at the new year. But I also want to reflect about the fabulous community of authors, readers, and people in the business with which we are still surrounded. Happy holidays to you all.—Janet Hutchings