“The Crossroads of Mystery and Science Fiction, and Fighting Fear With Fear” (by Jackie Sherbow)

Posted on November 7, 2018 by somethingisgoingtohappen

Part of the challenge of getting works of fiction into the hands of readers who will enjoy them is finding the right way to describe them. Often there are many different angles from which a story can be seen. Last week, Eris Press, an imprint of Dell Magazines, released an anthology entitled Terror at the Crossroads: Tales of Horror, Delusion, and the Unkown, edited by EQMM and AHMM associate editor Jackie Sherbow and Emily Hockaday, associate editor of Analog Science Fiction and Fact and Asimov’s Science Fiction. Jackie and Emily felt there were many stories from our four fiction magazines that could be seen as tales of horror, and they have gathered a selection of them in Terror at the Crossroads. It’s our hope that the new perspective they’ve provided on some of the content of our mystery and science fiction magazines will attract the attention of horror fans, who may be missing out if they’re not yet subscribers.

In addition to being associate editor for the Dell Mystery Magazines, Jackie Sherbow is the editor of Newtown Literary; her own poetry has appeared in Okay Donkey, Bad Pony, OCCULUM, and elsewhere. In this post she reveals how Terror at the Crossroads came about. I highly recommend that you get a copy!—Janet Hutchings 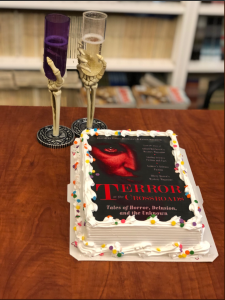 I’m someone who doesn’t mind working in a cubicle. Within the small enclosure, under the circle of a reading lamp in an otherwise dimly lit office, quietly working, I’ve been known to be so engrossed that a colleague approaching to talk to me has elicited a shout of surprise.

The potential of dread in someplace as mundane as an office cubicle aside, how is this related to the digital anthology recently released from Dell Magazines via our imprint Eris Press? Well, my colleague Emily Hockaday, the associate editor of Analog and Asimov’s, sits in the cube next to mine. Over the years, we’ve passed stories from the four magazines right over the wall—and often these have been the creepier tales that cross our desks. We both enjoy the horror genre, and we realized that while the mystery magazines do publish some science-fictional mysteries and the science fiction magazines some mysterious science fiction, the types of tales that met somewhere in the center frequently tread into the horror realm. This is the setting from which grew the idea to put horror stories from all four titles into one anthology volume.

To get started, my coeditor and I began considering the “center,” the crossroads where dark themes from EQMM, AHMM, Asimov’s, and Analog gathered: those of delusion, metamorphosis, obsession, and the unknown. The characters we encountered solve puzzles (from “Whodunit?” to “What now?”), meet challenges (whether it’s how to protect a community from a mysterious creature in the woods, or how to counter a postapocalyptic future), face their past (when their misdeeds catch up with them—or their memories are entirely erased), battle with ambition (regardless of who pays the price), and grapple with familial and interpersonal relationships (to very mixed results). As in science fiction and mystery, horror tests its characters in the most extreme conditions and makes the reader ask, about so many mortal dangers and moral conundrums, What would I do?

We then had to explore if—and why—this would appeal to readers. The horror genre certainly evokes a personal and visceral reaction, and it is experiencing what some are calling a renaissance. The New York Times Magazine dubbed 2017 The Year of Horror. In 2018, Jordan Peele’s Get Out garnered four Oscar nominations, which was unusual for a movie released so early in the year, unfortunately very unusual for a movie with a Black writer and director, and unusual for the genre category. (Only a small handful of other horror films have ever been nominated for Best Picture, and only one has ever won.) With an influx of classic novel adaptations and even the development of terror-tinged teen shows and comedies, we see this on TV as well. And, of course, we see it on contemporary bookshelves. As Parul Sehgal said in a recent article, “Literature—the top-shelf, award-winning stuff—is positively ectoplasmic these days, crawling with hauntings, haints and wraiths of every stripe and disposition.” (One of my favorite books from last year, The Changeling by Victor Lavalle, recently won the August Derleth Award for Best Horror Novel.)

I’m not surprised that the genre is presently striking a note with audiences and readers. Most literature offers an escape, but while fantasy, romance, or adventure might take you to your loftiest dreams, horror takes you to your darkest ones. The reader puts down a book and emerges out of a dungeon. Immersing in a scary story is a thrill, yes, but it’s also a relief to feel horrified, eagerly, by excellent prose—before someone or something else does it for you. Fiction offers a way to control fear, a feeling that is so often engendered by others, enforced by systemic oppression, heralded by nature, or instilled by trauma or illness, notably depression and anxiety. I may jump when you sneak up behind me at my desk, but I love to be alarmed—as long as it’s by my own choosing, and I have since I was very young. Any other fan of horror fiction (or roller-coasters, or suspense, thrillers, and mystery fiction) knows the feeling. Even while others in our lives look at us aslant, themselves hating the feeling of being uncomfortable, we continue to seek out this feeling.

I went to one of those haunted houses where you have to sign a waiver, go in alone, and be open to however the actors want to interact with you. As I confessed to my sceptical friends afterward, it wasn’t even that scary. What was most distressing, though, was the part where they simply leave you in a pitch-black room by yourself. Because what’s more frightening than I am, the world I inhabit, and the creatures that inhabit it with me? What’s more terrifying than the responsibility of moving through this world, and what specters cause more harm than the ones in our own history and nature?

During a time of political unrest or any other instability, this comes to the surface. Readers and viewers want to jump right in. Successful horror fiction mirrors society and environment; the monsters can just as easily be real as they can be a metaphor, and vice versa. Stephen King, in his introduction to the 2011 edition of The Shining, talks about bringing the characters of his story into “I-hope-this-is-only-a-dream territory[,] where the merely scary becomes outright horrifying.” What compels the deeds of his characters? “Is it undead people, or undead memories?” While King came to one conclusion and Stanley Kubrick to another while directing the 1980 film from the book, the author allows that “perhaps those different conclusions are, in fact, the same. For aren’t memories the true ghosts of our lives?” Are the monsters “real”? Either way, we end up in the same place. Furthermore, horror fiction wants to grapple over the misdeeds and unfinished business of a human life, a family, a community, and a country. To quote again Parul Sehgal, “ghost stories are never just reflections. They are social critiques camouflaged with cobwebs; the past clamoring for redress.”

Mystery and science fiction portray and examine the world in their own ways too, with their list of questions about human nature and our personal and collective past, present, and future. They also bring their own aspects (like puzzle solving, legal inquiry, speculation, and science) and atmosphere (like that of a traditional mystery, noir, or thriller). These genres—on top of their other timely and timeless appeal—are powerfully, and simply, entertaining. We thought, wouldn’t it be great to put all of this together?

And so we felt we would find in our audience (and, hopefully, beyond) those who would relish a fearsome anthology taken from the pages of EQMM, AHMM, Analog, and Asimov’s. Who better to keep you company than characters like those in Terror at the Crossroads, searching for meaning, success, romance, and passion; fumbling through marriage, parenthood, friendships, and work; experiencing all the same doubts and late-night worries that you do, while offering the types of mystery and SF stories you enjoy?

We ran the idea by Janet as well as Linda Landrigan, Sheila Williams, and Trevor Quachri (the editors of AHMM, Asimov’s, and Analog) and Chris Begley, (Dell’s VP of Editorial). Everyone was willing to hop aboard our spooky train. Then we began the fun part, selecting stories for the book. We tried to choose a group of tales with a variety of styles and viewpoints from the last ten years of the magazines. Many of our contributing authors are fans of the horror genre—and a number do write it in it often—but some were pleased to see their story in a new way, or to have a story they took a chance on see a new publication. Meanwhile, we approached the people who made this anthology possible: our subrights and digital-marketing team. Carol Demont, Joy Brienza, and Abby Browning have our gratitude, as does the typesetting team, headed by Sue Lemke and Jayne Keiser. It was my and Emily’s first time putting together a digital anthology, and they walked us through the process and handled the enormous amount of work involved with preparing a book for different digital outlets. Of course, I should also thank my coeditor Emily, for all her work and skill. Dell’s editorial assistant Deanna McLafferty helped us with proofreading and administrative tasks, and Joy designed the fantastic cover. Darcy Bearman helped us with social media and came up with the idea for our digital launch party, which took place last week. We are so lucky to have had a group of enthusiastic and generous authors who gave us their time and participation; you can see some of the highlights here.

The book is full of chills, but it’s the mystery and science fiction you’ve come to love through the pages of the Dell fiction titles. There’s no gratuitous violence or gore, and we tried to run the widest gamut of tales we could, including historical, humor, and straight narrative; epistolary, visual, and experimental forms; novellas and shorts. The tales have garnered EQMM Readers Awards and Edgar Award nominations, and offer a chance to experience horror through the lens of the magazines you may already know.

After all the requisite planning and preparation since we began this project in December of last year, the book is now ready (on Amazon and Barnes and Noble, and soon to come on other platforms), and we are so excited to share it with you.

5 Responses to “The Crossroads of Mystery and Science Fiction, and Fighting Fear With Fear” (by Jackie Sherbow)