Posted on October 31, 2018 by somethingisgoingtohappen

Barb Goffman is a winner of the Agatha, Macavity, and Silver Falchion awards for best short story. Her honors also include eleven nominations for the Agatha—a record in the short-story category!—and eleven nominations for other national crime-fiction awards, including the Derringer and Anthony. Her stories have appeared in a wide variety of anthologies, and in our sister magazine, Alfred Hitchcock’s Mystery Magazine. She debuts in EQMM in our current issue (November/December 2018) with the Thanksgiving story “Bug Appétit.” In this post she reflects on two of the most significant and prevalent motivating forces for characters in crime fiction—love and hate.—Janet Hutchings 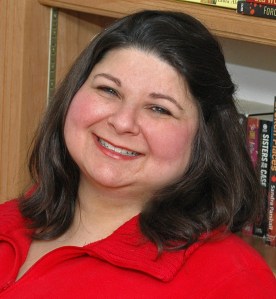 I planned to write today’s column about the role of love in mysteries. Tackling love might be more appropriate on Valentine’s Day instead of Halloween, but it felt appropriate since the Hallmark Channel and Hallmark Movies and Mysteries have already begun airing their Christmas movies. For the next two months, it will be all romance all the time on those channels, one movie after another showing true love being found in two hours. (Wouldn’t that be nice?)

But the events of the last few days have led me to a lot of thinking about the other side of the coin. Instead of love, I’ve been contemplating hate.

So often these days, crime fiction is based on hate. It makes sense. If a character is murdered, the detective—whether a police officer, a P.I., or an amateur sleuth—typically will start out the investigation checking if someone had a beef with the victim. Who hated him? Was the victim a blackmailer? Had he killed someone’s cat? Was he sleeping with another man’s wife?

When the victim is someone who did a horrible thing, or someone accused of doing a horrible thing, it gives the sleuth a means to find the killer. You start with who had motive—who hated the victim—and then consider who had the opportunity and what proof can be found of the killer’s guilt. That’s a solid foundation for solving a mystery, and thus it’s a solid way to plot out writing one.

Hate serves another good role in mysteries. It can make readers feel more secure. This might seem counterintuitive, but think about it. If a character did something horrible, or is accused of it, and then that character is murdered, a reader may take some comfort in that. The reader needn’t worry she’ll face a similar fate in real life because of course she isn’t a horrible person. She’s done nothing to bring murder on. She’s safe.

This is why after a murder you often will hear the police trying to assure the community that this was an isolated incident, a matter of domestic violence, perhaps. The implication is, don’t worry; you’re safe. No one is coming for you. In contrast, if the victim were Little Mary Sunshine and the murderer were a sociopath killing at will, that would be unsettling, both to everyone in the fictional victim’s community as well as to the reader. If random murders could happen on paper, the reader may think, it could happen here, too. Better lock the windows. Keep the children inside.

Of course anyone who has read the newspaper in the last week knows that random murders and attempted murders do happen. They happen for reasons having nothing to do with the victim, but because the perpetrator is full of hate—hate that isn’t predicated on the victim’s actions. There are sociopaths who kill for no good reason (even if a deluded person thinks he has a valid reason). And since crime fiction so often reflects the types of crimes occurring in real life—helping the authors and readers confront the awful things going on in our world and perhaps encouraging them to find ways in real life to better the world—crime fiction often will reflect the hate of extremists.

So there you have it. At bottom, crime fiction largely is about hate. Even if portrayed in a lighthearted cozy murder mystery, the underling story is one of hate. Hate of a specific person because of something she did or something someone thought she did. Or if we’re talking a noir novel or thriller, it could be a story about hate of a group of people, often for reasons having nothing to do with those actual victims. If the book goes into the perpetrator’s point of view, it will be one that subjects the reader to that hate, to the darkness that can exist in a person’s mind, to the pain or fear or just plain evil that drives the killer. Just thinking about it is depressing. And if that’s all there were to crime fiction, I might leave the computer right now and crawl up into a ball and never read or write again. Thankfully, it’s not. For while crime fiction might, at bottom, usually be about hate, it also is often about the very thing I originally planned to write about today. Love.

Why do police officers and police detectives (fictional and real) risk their lives? Some might be in it for the power or the adrenaline rush, but many do it to make the world safer, to try to provide justice. They risk their lives to make things better for others. And isn’t that a type of love?

When a thriller hero puts his life on the line, trying to save a victim, often the motivator in those stories is love, too.

And here’s something I didn’t mention above: sometimes criminals, even killers, act out of love. People who would never succumb to crime because of hatred may very well do so because of love. In Les Misérables, Jean Valjean stole bread for a starving child. In the NBC TV show Good Girls, a mother’s love for her dying child was behind a robbery that netted enough money to get the girl treatment, and then led to a series of worse and worse crimes done partly to cover up the first one.

Love also can play a role in crime novels other than motivating a killer or a sleuth. Love can lead people to act against their self-interest, taking blame that isn’t theirs, covering up crimes of others. Maybe even helping bury bodies. In this way, love can make crime fiction so interesting because it addresses how far an average person might go when his back is against the wall. You might feel strongly you’d never kill another person out of hatred. But what if someone stood between you and the medicine your dying child needed? That’s an interesting question, and it’s less depressing than considering murder based solely on irrational hatred.

So while it’s true that there is much hate in this world, and mystery novels often are predicated on hate, it’s important to remember that so much of what occurs in the world and in fiction—even crime fiction—also happens because of love. It’s what keeps books from being too depressing. It’s the light that gives people hope—even at the end of horrible weeks like this one—and it’s what makes readers want to keep turning pages. So, crime fiction authors, don’t get too bogged down in hatred when you write. In the end, the Beatles had it right. All you need is love.

This entry was posted in Christmas, Fiction, Genre, Guest. Bookmark the permalink.