Posted on September 12, 2018 by somethingisgoingtohappen

When I and my colleagues at the Dell Mystery Magazines, Linda Landrigan and Jackie Sherbow, were interviewed on the blog SleuthSayers back in June, a corresponding invitation went out to members of SleuthSayers to blog for this site. Award-winning author Jan Grape is one of those who accepted the invitation. A native of the hill country of Texas, Jan is an Anthony Award winner for best short story and has produced over fifty short stories and three novels, the latter featuring Austin, Texas policewoman Zoe Barrow. Many know Jan as an active member of the mystery community.  She has coedited both nonfiction and fiction anthologies, including Murder Past, Murder Present, and Murder Here, Murder There (with coeditor R. Barri Flowers), and she’s a founding member of the HOT chapter of Sisters in Crime in Austin. This post takes us back to the beginning of Jan’s love affair with mystery fiction (and science fiction!). It focuses on an important writer for EQMM, Isaac Asimov, whose Black Widower stories appeared in EQMM from the early 1970s to the early 1990s.—Janet Hutchings 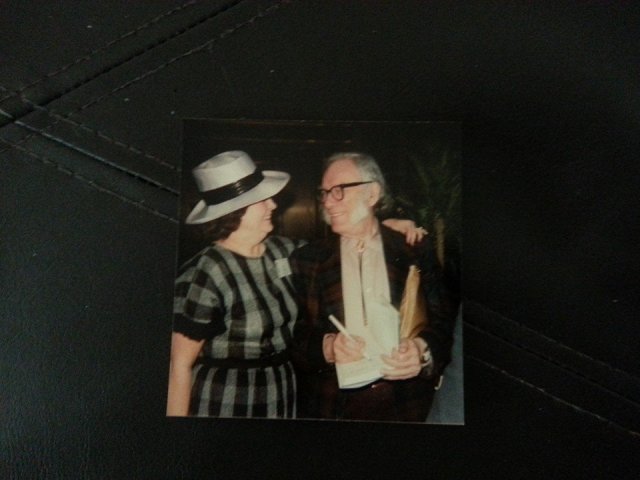 Maybe my love for and fascination with robots began because I was a bit of a nerd. I took classes in art and “expression” (public speaking with emotion). I was a romantic. I was also thirteen years old.

My parents were divorced, so I lived with my mother and stepdad in Post, Texas, about forty miles from the “big city” of Lubbock. My father and stepmother lived in Fort Worth. When I visited Fort Worth during the summer, I entertained myself with television and books while they were at work. My dad liked reading mysteries, mostly private-eye stories, so he first handed me books by Mickey Spillane, Richard S. Prather, and Erle Stanley Gardner. Once I had finished those he gave me science fiction by Isaac Asimov. I’ve always thought that I read The Naked Sun first, but after checking it out and learning that it wasn’t published until 1956, I’m now thinking that the first Asimov book I read was The Caves of Steel, which was the first book in the Robot Series. My memories of that story are nonexistent. The second book in the Robot Series, The Naked Sun, is the book I strongly remember, primarily because of the robot, Daneel Olivaw.

Asimov decided to combine mystery and sci fi, a play-fair novel in his mind. He wrote The Caves of Steel, which was a huge success. The premise of the second book, The Naked Sun, involves a New York City detective named Elijah Baley and a robot, R. Daneel Olivaw, who travel to a planet called Solaria to solve a murder. The setting is a sparsely populated planet with something like only twenty thousand people. There are around fifty other planets occupied by the very few people who are adventurous and strong enough to make a go of it on barely inhabitable planets. Robots are needed to help the humans make the planet livable. The people on Solaria have many robots that cook, clean, provide security, and tend to practically every need of the humans. In fact, the Solarians depend so much on the robots that they seldom see each other in person. They view each other with devices called “Viewers,” and, more often than not, they encounter a holographic image rather than a real person.

Most of the robots are worker robots that look like many of our robots today. Daneel was the only robot that had been created to look and sound human. The professor who created Daneel was the only roboticist to have developed the positronic brain. Daneel looked so much like a human that other robots thought he was a man. His skin tone was perfect. Each hair on his head was placed just so. Elijah Bailey could almost feel a friendship akin to love, until he remembered Daneel was a robot, not a man.

So, on Solaria, a wealthy man turns up bludgeoned to death. There can be no suspects other than his wife, Gladia, who is rarely in his presence (Solarians can barely stand to touch each other), or one of the robots.

In the story, all robots are made to follow the Three Laws of Robotics. First Law: A robot may not harm or cause harm to a human being. Second Law: A robot must obey a human’s orders. Third Law: A robot must protect itself, as long as it does not violate the First or Second Laws. To my thirteen-year-old heart, this sounded like the perfect situation! A handsome robot that would wait on me hand and foot and protect me at all costs? What nerdy, teenage, romantic girl would NOT fall in love with that?

Asimov didn’t write gory mysteries. In fact, he thought the blood and guts should be offstage, and that’s how he wrote his books. He wrote mainly in the classic style—or the Agatha Christie style. He enjoyed writing a puzzle story, and his favorite mystery was one in which the reader could figure out the solution if they paid attention to the clues. Asimov’s mysteries were of the puzzler-type in what were known as The Black Widower series. In these, a group of intellectuals would meet at a men’s club for dinner. Usually, one member would bring a guest who, after dinner, would present a problem that the others would try to solve. Each of the very educated gentlemen would try to present a solution to the puzzle. However, Henry, the club waiter, was invariably the one to come up with the solution. It was pretty much the same with the Union Club stories that Asimov wrote. A small group would sit around, and someone would present a problem. One of the older gentlemen, Griswold, sitting half asleep with his drink in his hand, would suddenly awaken and solve the puzzle.

Asimov could write these stories in his sleep, because they were pretty much the same each time: a bit of a puzzle, and then one person speaks up to do what the reader has been trying to do for thirty minutes.

To me, Mr. Asimov’s science fiction was his strong point and, probably, the rest of the world agrees. I think he absorbed scientific and mathematical things going on around him and then tried the writer’s idea of “Imagine that . . .” or “What if . . . ?” His imagination traveled light-years away. He himself said in his autobiography that he wrote every day. He never even took time off for any holiday.

Asimov was born in Russia, but his parents came to America when he was three. After a series of menial sales jobs, his father bought a candy store and his parents spent all of their time working it. His parents never learned to read or write or even speak English very well, just enough to get by. His father had been educated in Russia, but his mother had not. Asimov’s parents never taught him Russian. They would speak to each other in Russian when they didn’t want the children to know what they were talking about. I’m surprised he never taught himself!

He began going to the library when he was nine years old, and he read everything from Shakespeare to Dickens to The Iliad to Greek mythology. He read the Bible, mostly the Old Testament, but Christianity never took hold in his mind. (His family was Jewish, but they never practiced Judaism.) He called himself a “humanist.” As a writer he also wrote nonfiction about understanding the Bible and other great literature, and just about any subject you could think of, including some children’s stories.

Given his penchant for science and mathematics, it was natural for Asimov to imagine a future world with robots and other technology such as moving sidewalks that operated at different speeds to move twenty billion people around NYC, like he describes in his 1953 book The Caves of Steel. He imagined worlds where people “viewed” each other rather than existed in each other’s actual presence. I have to say, it reminds me of our world today, with people interacting via texts, photos, and Skype. We also have many robots in our present-day world, although for the most part they don’t yet resemble humans. So far, our robots are used for things like bomb detection, search and rescue, or assembly-line work.

For all of my thirteen-year-old longings for a dreamy robot boyfriend who would drive me around in his fancy robocar and make me one of the coolest girls in junior high school, Mr. Asimov’s books were without romance. Quite understandable, I suppose. Most popular fiction of the mystery and sci-fi genre in the 1950s was geared towards men. The books my father had that I was reading were certainly devoid of romance. Mickey Spillane’s Mike Hammer had a lovely secretary, and although he might have lusted after a dame, it was for sex only. Dashiell Hammett was in the same milieu. Dames were either gangster molls and evil, secretaries and helpless, or somewhat undesirable—like Gardner’s Bertha Cool, who was smart but overweight and a woman who never thought of herself as sexy or lovable. When Asimov wrote The Caves of Steel and The Naked Sun, detective Elijah Baley’s wife and son were almost an afterthought, although Baley did have a strong desire for his son to migrate to another planet, since Earth would not be able to sustain enough food or room for the growing population.

Male writers in the 20s, 30s, and even into the 50s had grown up in a time when romance and sex weren’t discussed in polite company. I’m sure Asimov’s Russian parents were too busy trying to make a living running their candy store to have a moment to think about love and romance.

However, Asimov threw a new element into the mix. Lovely Gladia, the woman accused of killing her husband, does not want even to shake hands with the Earthman, Baley. She, as well as all Solarians, knows that all Earthlings are thoroughly sanitized on the spaceship during the trip to their planet, but Solarians have a constant fear and horror of contracting diseases from Earth. One does begin to get the idea that Gladia is somewhat fascinated by Elijah and he is equally fascinated by her. However, the closest brush with romance that they experience is when Gladia removes her latex glove to touch gently Elijah’s face before he leaves Solaria to go back to Earth.

Fast-forward twenty-seven years, to Asimov finally writing the third book in the Robot Series. In The Robots of Dawn, Elijah and Daneel are sent to Planet Aurora, to solve a case of roboticide. The main suspect is the gifted roboticist who had developed the positronic brain and is the only person who has the motive, means, and opportunity to kill the robot. The roboticist even admits that he is the prime suspect, but emphatically denies that he did it. However, the lovely Gladia is now residing on Aurora, almost totally ignored because Aurorans don’t care for Solarians, and she is ultimately accused of the murder of Jander. Jander is the second humaniform robot with a positronic brain and had looked and acted as human as Daneel.

Asimov finally gets to Gladia’s secret love life in this third book. The robot that has been killed had been Gladia’s lover! And, in her mind, Jander was her husband in every way. This, of course, excited my thirteen-year-old self! Yes, the robot lover! (I’m not sure I had consciously thought of the robot as a sexual partner, but perhaps my subconscious did.) Finally, Gladia has sex with Elijah Baley. She leads and he follows. What man wouldn’t?

This, from Mr. Isaac Asimov? WOW!

3 Responses to “Daneel Olivaw & Me” (by Jan Grape)