Posted on October 19, 2016 by somethingisgoingtohappen

Last week, in my October 12 post, I promised some photos of the celebratory events surrounding EQMM’s 75th anniversary, beginning with the Ellery Queen panel at the Bouchercon World Mystery Convention in New Orleans and concluding with the reception following the EQMM 75th-Anniversary Symposium at Columbia University. EQMM’s senior assistant editor Jackie Sherbow has collected some of the best of the photos and arranged them here. Many of you will already know who the symposium participants are, but some information about each follows the photos.

Please don’t forget that the entire symposium is being made available through both audio podcast and YouTube video. Part 1 of four segments is already up, and Part 2 is expected to follow next week. Don’t miss it!—Janet Hutchings

The EQMM anniversary-panel toast at Bouchercon 2016 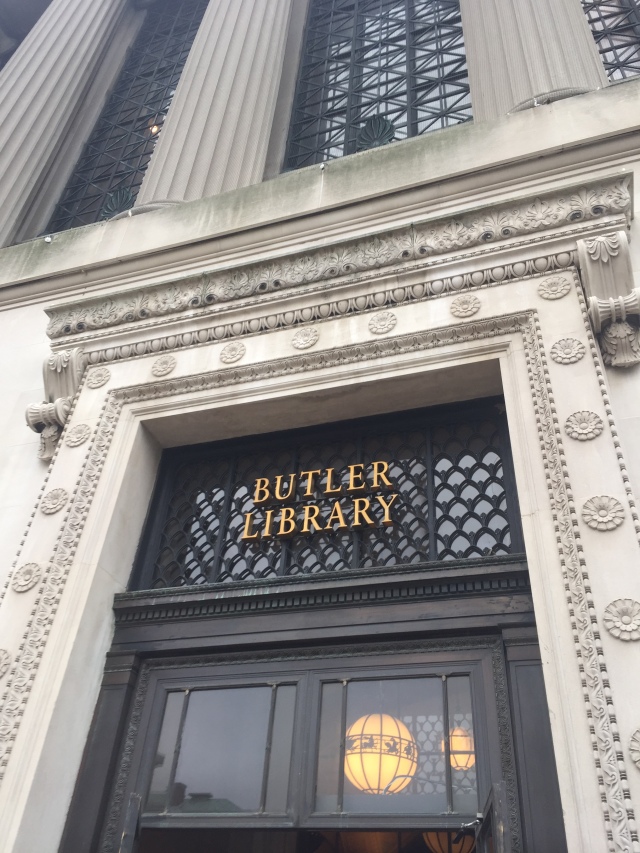 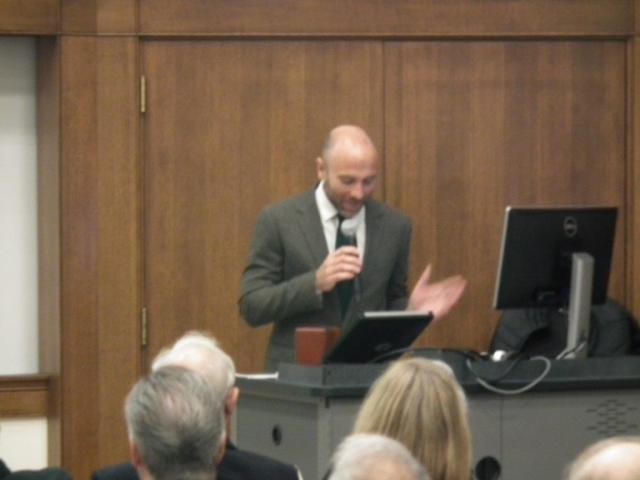 Panel 2: A Brush With Death: Crime Fiction Cover Art and Illustration from the Pulps to the Present. From L to R: Janet Salter Rosenberg, Laurie Harden, Tom Roberts, and Jonathan Santlofer (moderator) 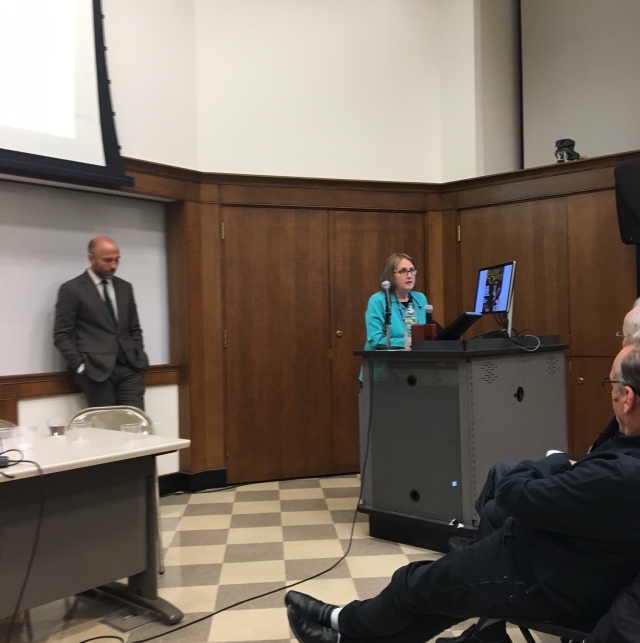 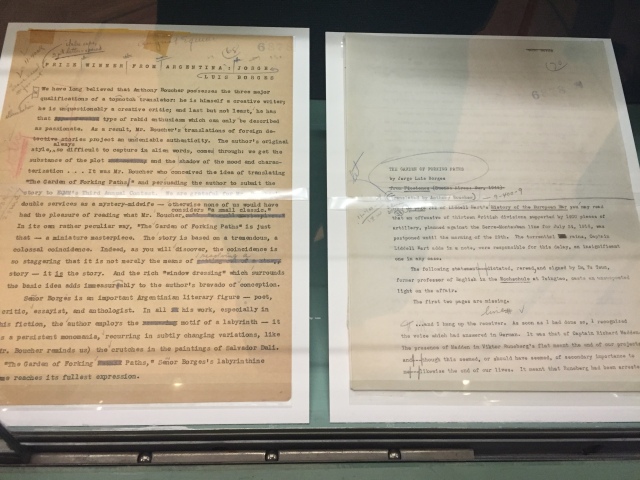 Peter Kanter and Josh Pachter offer a bilingual toast at the reception.

SEAN QUIMBY is Director of the Rare Book & Manuscript Library of Columbia University Libraries. Previously he served as Senior Director of Special Collections at the Syracuse University Library, where he was responsible for the records of pulp magazine publishers Street & Smith, Ace Books, and Hugo Gernsback, as well as the archives of writers like Joyce Carol Oates. Trained as a historian of technology, he began his career in libraries at Stanford University.

SARAH WEINMAN is the editor of Women Crime Writers: Eight Suspense Novels of the 1940s & 50s (Library of America) and Troubled Daughters, Twisted Wives (Penguin). Her short stories have appeared in both EQMM and AHMM, and she has written about crime fiction for the New York Times Book Review, the New Republic, the Wall Street Journal, and many other publications. She is also News Editor at Publishers Marketplace.

LEAH PENNYWARK is a doctoral candidate at Purdue University. She specializes in twentieth-century American literature with a focus on detective and postmodern fiction. She has published in LIT: Literature Interpretation Theory and is finishing an article on EQMM’s impact on literary fiction in the mid-twentieth century.

JEFFREY MARKS is an award-winning crime-fiction biographer. His first book-length work, Who Was That Lady?, appeared in 2001, chronicling the life of mystery writer Craig Rice. It was followed by Atomic Renaissance: Women Mystery Writers of the 1940s and 1950s. More recent works include the Anthony Award winning Anthony Boucher; his 2013 biography of Erle Stanley Gardner; and his work-in-progress, a biography of Ellery Queen.

CHARLES ARDAI is a winner of the Edgar, Shamus, and Ellery Queen Awards, the author of novels such as Little Girl Lost, one of the writers and producers of the TV series Haven, and the founding editor of Hard Case Crime, the acclaimed pulp-fiction imprint which has published authors ranging from Stephen King and Michael Crichton to Mickey Spillane and Gore Vidal. His first professional fiction publication was in EQMM.

JANET SALTER ROSENBERG is the adopted daughter of Agnes and George Salter (EQMM’s first art director).  She was a book editor for ten years, working at Random House, Berkley Books, and Columbia University Press.  While at Random House, she collaborated with her father on Italo Calvino’s first novel published in the U.S. It was the first of several designer/editor, father/daughter collaborations. She is currently writing a memoir.

LAURIE HARDEN attended the Kansas City Art Institute and the Rhode Island School of Design, studying painting, illustration and print-making. She works as an art instructor and freelance illustrator, with clients ranging from Ladies’ Home Journal to the New York Times to Simon & Schuster. Her paintings are in many collections, internationally, including those of the National Cancer Institute and the late Japanese prime minister Keizo Obuchi.

TOM ROBERTS is an illustrator and designer who has designed more than 120 hardcover and paperback books, as well as comic books and TV storyboards. He has appeared on A&E’s Biography and his art has been shown in exhibits across the country.  He also writes articles and books on illustrators of the past, including the award-winning Alex Raymond: His Life and Art. In 1997, he founded Black Dog Books, to bring awareness to the impact pulp magazines have had on popular culture.

JONATHAN SANTLOFER is the author of a half-dozen critically acclaimed novels, including the Nero Award-winning Anatomy of Fear. He is the editor of several anthologies, and his short stories have appeared in EQMM and other magazines. A well-known artist as well as a writer, he’s on the board of Yaddo, the oldest arts community in the U.S. His artwork is in such collections as the Metropolitan Museum of Art, the Art Institute of Chicago, and Tokyo’s Institute of Contemporary Art.

RUSSELL ATWOOD is a former managing editor of EQMM and the author of short stories and two well-received novels. His interviews with mystery writers such as Reginald Hill and Colin Dexter have appeared in Biography magazine. He has also written live shows, including the adult puppet comedy “The Nickie, Jameson, and Fred Show.” His most recent venture is the opening of a combination rare bookstore/performance art space called Mostly Mystery in Westfield, MA.

OTTO PENZLER is the proprietor of The Mysterious Bookshop (in NYC) and the founder, in 1975, of The Mysterious Press, now an imprint at Grove/Atlantic. He also publishes original works and classic crime fiction through MysteriousPress.com. The editor of more than 60 anthologies, including 20 volumes of The Best American Mystery Stories of the Year, he has won two Edgars for best critical work and is a recipient of both the Ellery Queen and Raven awards.

JOSH PACHTER debuted in EQMM in 1968 at the age of 16 (the second-youngest fiction contributor ever). Over the almost half-century since, he has contributed to EQMM another four dozen solo stories, collaborations, and translations of fiction by Dutch and Belgian writers. The Tree of Life, a collection of his Mahboob Chaudri stories, was published in 2015, as was Styx, a novel he wrote in collaboration with Belgium’s Bavo Dhooge.

JOSEPH GOODRICH is an Edgar Award-winning playwright whose work has been produced across the U.S. and Canada. He is also the author of short stories and critical/biographical works in the mystery field (including 2012’s Blood Relations: The Selected Letters of Ellery Queen). His current play, Calamity Town, based on the Ellery Queen novel of the same title, recently ran to critical acclaim in Calgary, Canada.

JOYCE CAROL OATES is a winner of the National Book Award, two O. Henry Awards, and a National Medal for the Humanities (among many other honors). One of America’s most celebrated writers, she is the author of more than 50 novels and dozens of short stories, most under her own name, but a number employing her crime-writing pseudonyms Rosamond Smith and Lauren Kelly. Since 1992 she has contributed more than two dozen stories to EQMM.