Posted on November 18, 2015 by somethingisgoingtohappen

Marilyn Todd is the author of sixteen historical novels and dozens of short stories, many of the latter for EQMM. Two recent collections of her tales are worth mentioning. Swords, Sandals and Sirens (Crippen and Landru Publishers) gathers, in print, primarily stories from her Ancient Roman series starring wine merchant Claudia Seferius. Untreed Reads will be bringing out a separate e-collection of the British author’s historical stories (title yet to be determined) in the spring of 2016. Marilyn’s fiction is often filled with the romance of adventure. But come to that, so is her life. She and her husband travel extensively, and they could hardly have chosen a more romantic place to call home—as you’ll see in this post. —Janet Hutchings

The novel pretty much writes itself. Couple move to France. They buy some land, build a house, and while it’s going up, unearth a body.

Except this isn’t fiction.

This happened to us.

Cognac (yes, that Cognac, where the world’s finest brandy comes from) isn’t exactly renowned for violence. More for tourists, weaving through its narrow cobbled streets and photographing its delightful half-timbered buildings, sipping coffee at a pavement café, strolling the quays beside the river, and sampling its smooth amber delights.

In fact, the best Cognac sees by way of aggression is water-jousting. Proof that Ancient Roman traditions are still alive and well, water-jousting is where opposing teams row hell for leather towards each other in shallow boats, the aim being that their lancer, balanced precariously on a special platform, knocks their opponent in the river. Thirsty work, stirring stuff, but not so competitive as to want to kill each other.

Having said that, we’re not exactly in the centre of the town. The plot we chose—a field, basically—lies at the edge of a village of just four hundred souls which, although only a short distance as the crow flies, is very much in the country.

And it absolutely reeks with history.

The ancient Gauls left few traces, certainly none round here. But shortly before we moved to our hilltop paradise, local archaeologists discovered a Roman bridge across one of the many arms of the little river that flows beneath the bluff just fifty yards from us. The Via Agrippa (think Roman interstate) passes half a mile away. And in winter, when the trees are bare, we can, if we lean far enough over the balcony without falling off, just about make out the slate roofs of a château, whose foundations date back to the Crusades. Not bad for a neighbour.

This idyll quickly became the inspiration for Scorpion Rising. Riddled with caves, perched on a rocky promontory shaped like an arrow head, and with a stream at the bottom with more arms than the goddess Kali, this was why we made this plot our home. And given that one of the castle’s many incarnations was a seminary for Catholic priests, it seemed only right that I continue the theme. In my case, with a college of nature priestesses, who kept men as sex slaves (down, boys!) in a compound at the top of the hill.

Right where our house was being built. 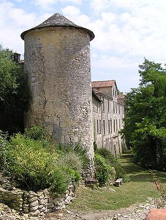 They say life imitates art, and while I was quietly plotting uprisings and murder taking place on that very spot, mechanical diggers had been in, foundations had been laid, bricks were going up—and my husband was busy clearing the land.

Which, in many ways, was a pity. Brimming with wildflowers and littered with fallen trees, it was a haven for wildlife. Keen-eyed buzzards perched on the poles, kestrels hovered overhead, and at one point a deer raised two fawns in the garden. But what was, not so long ago, part of a woodland and a field for sheep needed to be tidied. If only to let us to drive in! Bit by bit, Mr. Todd tamed the invasive tangle of brambles and shrubs, cut down grass that was chest high in places, and disposed of the chestnut trees rotting happily away into sawdust. Finally, he was free to tackle the four-metre high, three-metre deep, thirty-metre wide mountain of greenery that formed our front boundary.

Within no time, all manner of stuff began turning up. Rusted gates, iron bedframes, charred timbers, rubble, even a ploughshare, all bound together by fist-thick roots and tendrils of ivy. So when he spotted a lump of corrugated iron he wasn’t exactly surprised. Another contribution for the local amenity tip! But as he wrestled more branches, and more snakes, he realized it hadn’t been dumped. This was the roof of an old shed, that had once served as a woodstore, and the shed was still standing.

Instant echoes of Cold Comfort Farm. “Something nasty in the woodshed.” Whoohoo.

Over the course of the next few days, other items saw daylight for the first time in decades. Gloves, jacket, boots, socks, an old blanket. And with every new find, we’d try to imagine what illicit purposes this ramshackle shed might have been put to. Was this the local red-light district? A lovers’ tryst? Or, since the stuff turning up was purely menswear, evidence of cottaging in this village of just four hundred scattered souls?

To add to the intrigue, the woman who sold us the land was divorced, the husband apparently not seen again afterwards. Could this have been his hiding place? His refuge from nagging? Was that why he divorced her, he couldn’t take any more? Or did she divorce him, because he spent all his time in the woodshed, rather than working? Either way, Monsieur P. hadn’t been seen for over twenty years, and when a pair of boots turned up—well, talk about conspiracy heaven!

Then my husband came home and said, “I’ve found bones.”

You could have heard a pin drop.

Suddenly, all those jokes about Monsieur P. running as fast as he could after the divorce weren’t so funny.

Time to call in the cavalry.

Needless to say, what bones remained had been shattered beneath decades of rubble and junk, but there was certainly a skeleton in there.

The good news was, Monsieur P. was alive and well. That’s to say, it wasn’t his remains in the garden, and what a relief that turned out to be. The bad news is that some poor animal, most likely a wild boar—the skull was never recovered—had crawled in there to die. Certain pig bones bearing a worryingly close resemblance to human bones. (Remember that, next time you tuck into BBQ ribs).

We also learned that village life isn’t quite so tranquil as one might think. After the Revolution, when vast areas of France were completely lawless, there was a gang roaming this area, nicknamed Les Chauffeurs. Nothing to do with taxis or stretch limos. Chauffe is all about heat. Direct heat. These charmers would break into the homes of local peasants, tie them up, then hold their feet in the fire until they told them where their money was hidden.

Even today, very recently, a woman living alone was found dead in her home under suspicious circumstances. We’ve had burglaries, brawls, even helicopters searching for an inmate who escaped from prison forty kilometres away and felt our woods would make the perfect hiding place. Not.

Of course, the woodshed has gone. The land has been tamed. The buzzard showed its displeasure right down the patio doors, for a second I thought I’d blacked out.

Another mess for Mr. Todd to clear up.