Posted on October 21, 2015 by somethingisgoingtohappen

As in previous years, I came back from this year’s Bouchercon (Raleigh, North Carolina, October 8 – 11) to e-mailed photos taken by authors and friends at the convention, and with some tidbits of information I’d like to share.

Thursday’s opening ceremonies included presentation of the Barry, Macavity, and Derringer Awards. EQMM had two nominees for the Macavity for Best Short Story, Paul D. Marks’s “Howling at the Moon,” and Art Taylor’s “The Odds Are Against Us,” both from our November 2014 issue. (Craig Faustus Buck’s “Honeymoon Sweet,” from Murder at the Beach, an anthology edited by frequent EQMM contributor Dana Cameron, took home the trophy.)

Janet Hutchings and Paul D. Marks recording a podcast for his story “Howling at the Moon.” Photo courtesy of Amy Marks.

The Derringers had special meaning for me this year, since not only did eleven-time EQMM Readers Award winner Doug Allyn win the Best Novelette Derringer for his story “The Snow Angel” but James Powell, an author with a long and notable career writing primarily for EQMM, was honored as the latest recipient of the Edward D. Hoch Memorial Golden Derringer for Lifetime Achievement. Unable to get to Raleigh for the event, Jim had asked me to read his acceptance speech, and to use my discretion in shortening it to fit the time available. As a barbeque buffet was waiting for the hundreds of people at the opening ceremonies, I cut a small portion of his remarks, but afterwards so many people told me they’d been interested by what he had to say that I thought I’d post the whole of his acceptance speech here. I’ve worked with Jim on several stories a year for nearly twenty-five years, so his wit and whimsy are endearingly familiar to me, but I hope readers who don’t know his fiction may be inspired by his remarks to dip into his stories:

“I am very grateful to the Short Mystery Fiction Society for awarding me the Edward D. Hoch Memorial Golden Derringer for Lifetime Achievement, all the more so because Ed and I were friends. He was a frequent visitor to Canadian mystery events. I recall one Crime Writers of Canada awards dinner where he and I were chosen to present the Arthur Ellis for best novel and in my share of the remarks I wondered why it took two short story writers to do the job and I think he found that amusing.

We all know his tremendous output of stories. But he was also a prodigious reader. Here our paths crossed again. I had been reading Robert Louis Stevenson’s travel writing including The Amateur Immigrant and The Silverado Squatters where Stevenson described his trip to America for his health and the long train trip across the country to California. Not long after, reading one of Ed’s stories I saw he had been reading about that trip too, only he had found a mystery story on the way where I had not.

Most of my reading now is history and biography. Someone once wrote that the time of your father’s childhood is a golden age for readers. Perhaps it is for writers, too. That would be the beginning of the Twentieth Century for me. But my principle creation, the Ambrose Ganelon family, takes me farther back into the Nineteenth. I enjoy reading about these times. But it also helps me to perform that great hat trick, the greatest fiction of all, to convince the readers you know what you’re talking about.

For example, another Holmes (not Sherlock but Oliver Wendell) describes in Our Hundred Days in Europe, in 1887, taking with him two new devices he thought the residents might be interested in, the safety razor and the luminous matchbox. This last handy object allowed you, waking up in the dark, to find a match to light the wall gas fixture. I had previously read, by the way, that Pierre and Marie Curie used to amuse their dinner guests by turning out the lights and passing a lump of radium from hand to hand around the table! I used the illuminated matchbox in an upcoming story in Ellery Queen’s Mystery Magazine.

I have mentioned elsewhere that my first professional published story 48 years ago was based on an incident I heard about that took place in Monaco on the Riviera. But I had only spent an afternoon there and was afraid of being caught in some matter of fact so I invented my own principality with its own history and people and streets and buildings. To date I have written some thirty or so stories about San Sebastiano, as I named it. It is said that even Homer nodded. (And I have probably nodded as many times as all the Simpsons put together.) But in case some nitpicker discovers a street that doesn’t run the way in one of these stories as it does in another I have also provided the principality with a geological fault. Thus I can say, ‘Oh, that was before the earthquake.’ Or something equally face-saving.

In the end all our stories must be too short. May yours be as happy as mine have been. Thank you again.”—James Powell, 2015 Edward D. Hoch Memorial Golden Derringer for Lifetime Achievement recipient

Among the old friends and key contributors to the magazine that I was able to catch up with at this convention were Bill Crider, fiction writer par excellence and longtime author of EQMM’s Blog Bytes column; Josh Pachter, versatile contributor of solo fiction, collaborations, and translations for our Passport to Crime department; and Carol and Marv Lachman, the latter EQMM’s indexer and the author of a number of nonfiction articles for the magazine. 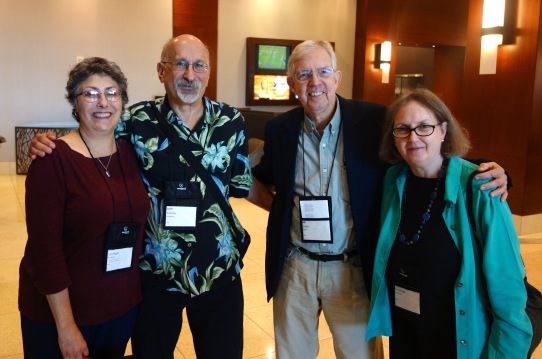 Seeing this year’s lifetime achievement award winner, Margaret Maron, who began her career as a short-story writer and is still one of the top writers in the short form in the genre, honored for a body of work that includes Edgar, Anthony, Agatha, and Macavity award winning novels was especially gratifying. And there were two more awards ceremonies at which the work of EQMM authors was singled out: On Friday night, at the Shamus Awards banquet, Richard Helms’s “Busting Red Heads” (also nominated for a Derringer Award) competed with four other stories for Best Private-Eye Story, a title that went to Gon Ben Ari’s “Clear Recent History,” from Tel Aviv Noir. On Saturday night, two EQMM stories, again Paul D. Marks’s “Howling at the Moon,” and Art Taylor’s “The Odds Are Against Us,” and the AHMM story “Of Dogs and Deceit” by John Shepphird, were among the stories nominated for the Anthony Award—a very good night for the Dell mystery magazines! The Anthony went to Art Taylor, pictured here with his trophy. 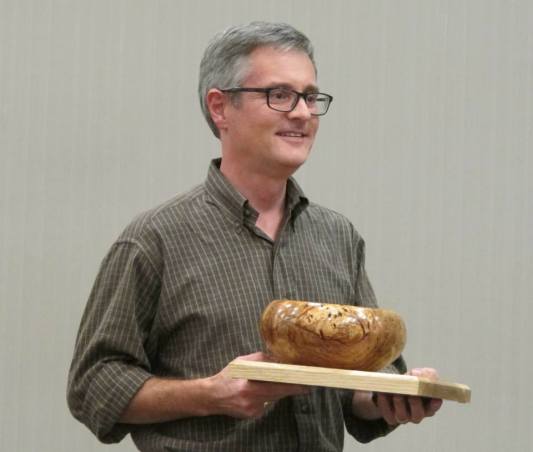 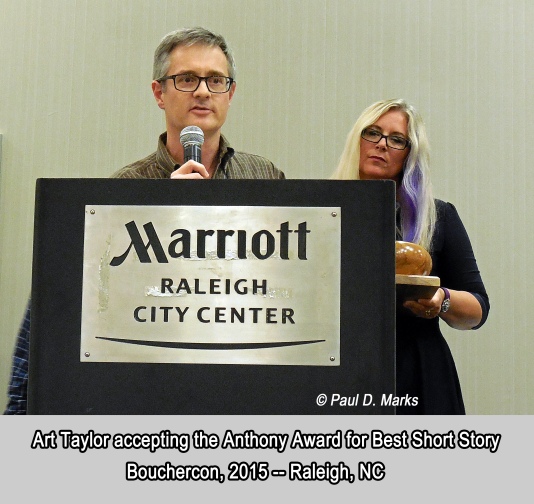 At Bouchercons, it isn’t always at the organized events or meals that interesting discoveries are made, and this convention was no exception. It was by the merest chance that I was sitting in the lobby of one of the convention hotels one afternoon when Jeffrey Marks, a writer I knew was working on a biography of Ellery Queen, happened to sit down near me and mention that he had just unearthed a mass of information in the Library of Congress about the discussions and negotiations that led to the launch of EQMM. To me, this was astounding news. I’d had no idea such documents existed, and as 2016 will be EQMM’s 75th anniversary year—a time for looking back as well as for celebration—it’s information we’ll be able to put to very good use.

Whether meetings are serendipitous, like my running into Jeff, or planned in advance, most Bouchercon goers seem to come away from these weekends with the sense that they’ve learned something—not to mention being convinced that mystery writers and those who work in the business are an awfully nice bunch of people! Certainly Raleigh left me thinking those things. —Janet Hutchings