Posted on December 17, 2014 by somethingisgoingtohappen

2014 is winding up at EQMM with a flurry of activity. The Bouchercon World Mystery Convention was more than a month later than usual this year, taking the mystery crowd to Long Beach, California at the end of the second week in November and leaving at least this editor breathless going into a holiday season that, in addition to the usual bustle of going over budgets and getting out holiday cards, has involved our packing for an office move that will take place at the very beginning of 2015.

However, before we turn the page on 2014, I want to mention various news items that we could not devote an entire column to as they occurred during the year.

The first major mystery events of 2014—spring’s Edgar Allan Poe Awards and the Malice Domestic Convention—were covered here, with photos, in my post of May 14. But there were a couple of other awards ceremonies that we at EQMM were unable to attend at which EQMM authors were recognized. The Crime Writers of Canada held their annual Arthur Ellis Awards banquet in Toronto on June 5, and Twist Phelan won in the short-story category for her July 2013 EQMM story “Footprints in Water.” A little over a month later, when the International Thriller Writers gathered in New York City for their annual convention, Twist joined two other EQMM authors, Kevin Mims and Stephen Vessels, on the list of short-story nominees and again claimed the award for “Footprints in Water.” The story had previously received the Colorado Authors’ League Award for best short fiction of the year.

Our summer ended (too soon) in September with a company picnic in Connecticut, where New York staff were able to connect with the people in our Connecticut offices who provide our magazines’ art, typesetting, marketing, production, subsidiary rights and Web services, and all the rest of the support that keeps us running. We’re including photos of some of those hard-working people here as I suspect the authors among you may like to see who works on your stories’ art and layout, makes sure your work gets to the printer without dropped pages, and handles distribution to bookstores and digital devices. (All photos taken by Ché Ryback.) 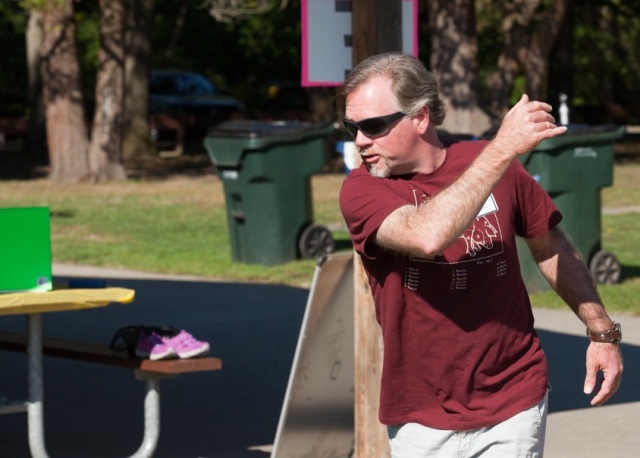 It wasn’t long after the picnic before we began preparing for Bouchercon. For those who are not familiar with this yearly event, it’s named for Anthony Boucher, the foremost mystery critic in America from 1951 until his death in 1968. The host city for the convention named in his honor changes each year, with volunteers from the area organizing the many panels, talks, crime film showings, and other events that highlight the long weekend. I can’t tell you much about the panels this year; I was too busy meeting with those of our authors and other contributors whom I don’t get a chance to see the rest of the year. But the post-convention buzz seems to be that Long Beach turned out to be one of the best conventions ever.

At the opening reception on Thursday night (November 13), Art Taylor took home the Macavity Award for best short story for “The Care and Feeding of Houseplants,” from EQMM’s March/April 2013 issue. Pictured below celebrating with him that evening, after the ceremony, are Brendan DuBois, Melodie Johnson Howe, Sandy Balzo, and Steve Steinbock—all EQMM authors, and all, except Melodie, writers who got their start in our Department of First Stories.

Bouchercon Friday began, for me, with a breakfast meeting with EQMM indexer Marv Lachman, at which we discussed the possibility of creating and making available for sale a comprehensive index of the magazine’s nearly 75 years of stories and other content. Since it would be very helpful to know, at this juncture, whether there’s enough interest in such a book to make the project worthwhile, thumbs-up (or down) e-mails on this are welcome at [elleryqueenmm@dellmagazines.com].

Other highlights of the convention for me were my lunch with International Guest of Honor Edward Marston (a.k.a. Keith Miles) and his wife, author Judith Cutler—both regular contributors to EQMM; the Shamus Awards banquet, at which four of the five nominated short stories were from EQMM (Jack Fredrickson’s “The Ace I,” Mick Herron’s “What We Do,” Michael Z. Lewin’s “Extra Fries,” and Hayford Peirce’s “The Leethal Leeteg”);  meals with writers and old friends Terrie Moran, Bob and Sandra Levinson, Dave and Judy Zeltserman, and James Lincoln Warren; and a chance to meet some writers newer to EQMM, including Paul Marks, Michael Wiley, and Iceland’s Ragnar Jónasson.

2014 wasn’t all good news and good company, however. It brought its share of sad news for EQMM and the wider mystery community. A number of writers and others connected to the magazines died this year, including William Bankier, award-winning Canadian writer of short stories (most of which appeared in EQMM); James H. Cobb, one of the best contemporary writers of the classical whodunit at short-story length; Jeremiah Healy, legendary private-eye writer and longtime contributor to both EQMM and AHMM; Dorothy Salisbury Davis, longtime EQMM contributor and friend of EQMM’s founding editor Frederic Dannay; mystery novelists and short-story writers Seymour Shubin and Martin Meyers—both of whom occasionally contributed to EQMM; Britain’s “Queen of Crime,” P.D. James, a handful of whose stories were reprinted in EQMM in the ’eighties and ’nineties; Judy Crider, wife of mystery writer and EQMM columnist Bill Crider and co-author of the 2002 Anthony Award-winning story “Chocolate Moose”; and Rose Dannay, widow of Frederic Dannay (a.k.a. Ellery Queen).

As I post this final column for 2014, we are also just about ready to release EQMM’s May issue to our typesetters for final formatting for the printer. June 2015 is currently being proofread. That takes us, already, nearly halfway through the production of our 2015 issues—and there’s a lot that we think you’ll enjoy in our pages in the coming year.

As for the remainder of 2014, there will be no more formal posts on this site (we return January 7th) but we’ve got some seasonal features instead.

Wishing you happy holidays and all the best for 2015!—Janet Hutchings