“What Happens Next Is F-Sharp” (by Stephen Ross)

Posted on January 8, 2014 by somethingisgoingtohappen

Stephen Ross made his fiction debut in EQMM’s Department of First Stories in June 2006. Since then, he’s gone on to write many fine stories in the mystery and science fiction genres, including one for AHMM in 2010 (“Monsieur Alice Is Absent”) that earned a nomination for the Edgar Allan Poe Award. His latest short story for EQMM will appear in our September/October 2014 double issue. The New Zealand author is currently working on a short film, which he describes as a “sci-fi/psychological thriller.” He is not only writing and directing the movie, he is composing its music. But as you’ll see, music and writing are both central to Stephen’s life.—Janet Hutchings

When I was thirteen, every Tuesday afternoon after school I had piano lessons. My piano teacher lived about two miles away, and to get to his house, I had to ride my bicycle down an alleyway that connected streets. The alleyway was a long, narrow strip of concrete lined with overgrown grass and the high wooden fences of suburban backyards.

One day, during the summer, I noticed a dead man in that overgrown, sun-baked grass. I came to a stop, one foot on the pavement, one foot on a pedal, and stared at the body.

This was Henderson, in the west of Auckland, New Zealand, in the summer, in my childhood. Dead bodies were not a typical occurrence.

After what seemed like forever, the dead man rolled over and regarded me with drunken contempt. He told me, with a hearty gust of fricative enunciation, to go forth from that place.

The other significant event of that day was that I learnt to play Gounod’s Funeral March of a Marionette. As I picked out the melody, my piano teacher explained that it was most recognizable as Alfred Hitchcock’s signature tune.

I didn’t readily know the piece, but I certainly knew Hitchcock. For at least two years (and since my father’s acquisition of a Super-8 movie camera), I had wanted to be a film director. Hitchcock was my God. 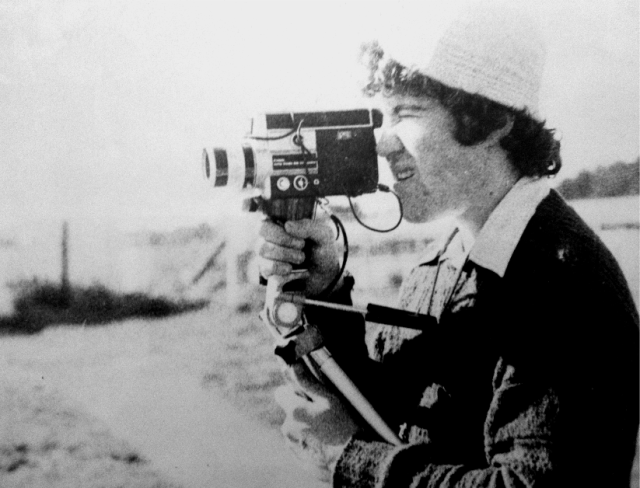 I immediately seized upon the incident in the alley as an idea for a movie. I even thumped out some themes on the piano for my intended musical score.

Thumping out film music had long been a hobby of mine. I used to play along to TV shows (mystery shows, mostly, like the Jim Hutton series of Ellery Queen), improvising an accompaniment like a silent movie pianist. My record collection at that point consisted primarily of soundtrack records, and I’m 99% certain I was doing the menacing semitone repetition at the bottom end of the keyboard at least a year before John Williams used it for Jaws.

So, I had an idea for my directorial debut and a few keyboard riffs for the music. But then I hit a bump in the road. What happened next? A kid on the bicycle discovers a dead man in an alley . . . and then what?

What I had was merely a setup. Nothing more.

I had the startling realization that a plot was:

What I had discovered for myself was the tip of an iceberg—the storytelling iceberg. The biggest iceberg in the ocean, on whose icy walls many a story had been dashed and many a writer marooned.

And before the iceberg analogy melts, may I add that every story we ever begin sets sail with the name Titanic bolted to it. Until we learn to alter course somewhere in its journey. And let me tell you, I have enough chunks of ice on my desk to supply every bar in Manhattan at New Year, and that my stock of cubes shows no sign of diminishing.

The infinite possibilities of what could happen next made my thirteen-year-old head spin. Anything at all could happen.

I had nightmares. I walked for days like a zombie. Deep inside my kid brain I was searching for what should happen. Curiously, I found the answer on the piano keyboard. What happened next was F-sharp (F#).

I had been whacking the piano keyboard for years, picking out tunes, practicing, and improvising. I had acquired an instinctive feel for the logical structure of music. I had a feel for what sounded right and what sounded wrong.

Play one note on a keyboard and it can be followed by any other note at all. Play the second and you have limited the possibilities for the third. Play the fourth, fifth, and sixth, and so on, and the range (or key) for the subsequent notes has been set. Play the “wrong” note, and it won’t sound right. And let me emphasize, I’m talking about tonal music, the kind you’ll make on a piano keyboard (atonal music is its own private Twilight Zone).

As a kid, my music practice began each day with scales. The eight notes of a scale are the purest sequence of notes you’ll find in music (they’re like a strand of musical DNA). I would start with G major (it’s always been my favorite). The scale of G major is straightforward. Start on the note of G, and then play all the white notes above it, with the exception of the second to last, until you wind up on the next G (an octave above).

The exception is where you play a black note. It’s F#. Play F natural (the white note) and the scale sounds wrong. It’s jarring, a bum note, and everyone knows what it sounds like when a singer goes off key and hits one of those.

I stared at the piano keyboard. That exception had answered my question. What should happen next is what feels right.

And “feel” is the operative word, because above the organization and notation of the notes being played, it’s the mood that is being conveyed by the music to the listener. For example, the scale of G minor is a vastly different beast to G major. You ride into town ready to raise hell with G major; you limp out of town the next morning with a mule of a hangover to G minor.

So what “felt right” for the body in the alley? What was the mood? I answered that easily. Dread. That had been the emotion I had felt spying the inert body in the long grass. As a thirteen-year-old I was aware of death, but I had never been confronted with it right up close and in person.

Dread was the key. So I played a few notes in that mood, and this was what I came up with:

The “notes” felt right. Looking back, it’s not a bad start to a story, and you could kind of guess where it might go. You could generate a lot of suspense answering the question: Did the principal/father kill the math teacher? And there’d certainly be a twist ending.

The capacity to learn music is an innate skill, the same as learning a first language (I sit in Chomsky’s Universal Grammar camp). In my opinion, the language of storytelling is no different. And for me, the music analogy for storytelling is just right. Each plot point in a story is a musical note. Play the right notes and you’re halfway to a decent story. Play a wrong note, and it won’t feel right. The story will be “off tune” or “out of key”.

Well, it works for me.

By the way, I never got any further with that plot about the dead body in the alley. I was thirteen. A bright, shiny object came along and distracted me.