Posted on December 9, 2020 by somethingisgoingtohappen

Jeff Soloway makes his EQMM debut with a story in the issue that goes on sale next Tuesday, January/February 2021. The story’s title is “The Interpreter and the Killer” and it stars a central character with a job we’re surprised we have not seen featured in crime stories submitted to EQMM before: a court translator. Jeff Soloway was the 2014 winner of the Robert L. Fish Award for best short story by a new American author, and he has since had stories published in AHMM, in two MWA anthologies, and elsewhere. He’s also the author of three novels in a series featuring travel writer Jacob Smalls. They are: The Travel Writer, The Last Descent, and The Ex-President. In this post Jeff takes up a subject that should interest every writer of crime stories—and readers of the genre too!—Janet Hutchings 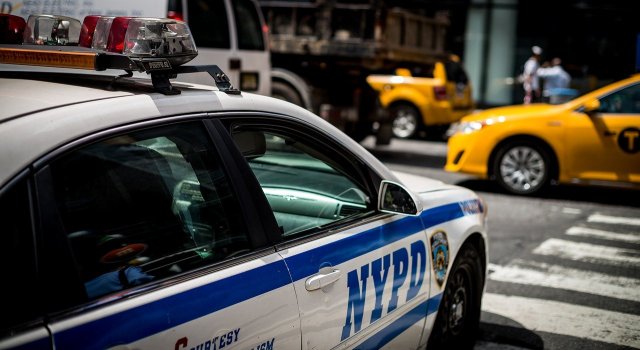 My wife writes up cops for a living. For more than eighteen years, she’s worked for the Civilian Complaint Review Board (CCRB), New York City’s independent agency in charge of investigating citizen complaints of police misconduct. She began as a junior investigator and now manages a team of investigators, but the basics of her job remain the same. She and her team field complaints from New Yorkers, gather evidence from cops and witnesses, and report their findings. When she was hired in 2002, cell-phone videos were all but unknown, Rudy Giuliani had just finished up his run as mayor, and the city was still traumatized by the crime wave that had crested in the early 1990s. Since then, policing in the city has changed, in some ways dramatically, and so has my wife’s work. She’s now one of the longest-tenured investigators in the agency. Few people know more about the evolution of New York City policing in the new millennium.

Like many devotees of crime fiction, I often find myself asking, after I’ve read (or written) a policing scene, how realistic it is. Unlike most, I can often get the answer from my spouse. Good police-procedural writers, and crime writers in general, tend to feel more of an obligation to reflect reality than other fiction writers. But reality is a moving target.

Richard Price’s excellent 2008 novel Lush Life begins with an unforgettable description of four plainclothes NYPD cops in an unmarked car, cruising the streets of the Lower East Side: “their mantra: Dope, guns, overtime; their motto: Everyone’s got something to lose.” They pull over cars for minor violations, but they’re really looking for an excuse to conduct a search and uncover drugs or, much better, illegal guns. In the novel, the team is called the Quality of Life Task Force, but in the real-life NYPD these roving plainclothes units were called, bluntly, anti-crime.

These anti-crime units always generated civilian complaints. When my wife began her job, many anti-crime complaints came from encounters with pedestrians or street corner hangers-around. In later years, anti-crime units shifted tactics and those complaints dropped off. The predominant source of anti-crime complaints became the ever-popular car stop, as described in Price’s novel—an illegal left turn that leads to a full vehicular search and so on. But about four or five years ago, anti-crime tactics began to change yet again. A new kind of stop was generating complaints. When asked in CCRB interviews to justify a stop, officers might explain that the driver who had, say, failed to signal his lane change, was not simply a random young man who happened to be cruising through the neighborhood but was instead a man the police knew and were watching, someone who, for example, might recently been the victim of a stabbing and could well be out for revenge. The anti-crime teams had begun targeting specific people for pretextual stops rather than simply the general neighborhood population (though they continued to do that too). Today, any writer who cares about realism would have to avoid NYPD anti-crime entirely. This June, under pressure from activists and reformist politicians, the anti-crime units were disbanded completely. The opening of Lush Life was perfectly accurate when Price wrote it, but it was a snapshot in time, now no longer true to life.

Narcotics units were another major driver of complaints in my wife’s early days. For many years, NYPD narcotics units depended on the buy-and-bust technique, in which plainclothes officers buy drugs from unsuspecting street sellers. In crime fiction and television shows, experienced locals can often smell undercover cops a mile away, but in real life, they’re not always so savvy, which is why buy and bust was so popular and also so dangerous. Surprise arrests of unsuspecting young men naturally lead to chaos, which leads to beatdowns. Complainants at the CCRB, many of whom were obviously drug dealers, would often tell some version of the same story: The complainant/dealer (almost always a man) would hand his goods over to some ordinary-looking buyer, who would then stroll away; some time later a different man, a plainclothes cop, would arrive and announce the dealer was under arrest. The dealer would have no idea he had just sold to undercover and often no idea why he was being arrested. He would think the arrest was a mistake, or an injustice, or was really for something other (maybe worse) than the obvious reason; and then he would run, forcing the cops to pursue. With adrenaline flowing on all sides, the dealer would get chased down and beat up, sometimes seriously—all for the crime of selling one small packet of drugs. Because these kinds of arrests are dangerous and exciting, they’ve been a staple of crime writing for years. But today my wife rarely gets these complaints. Buy and bust, in New York City at least, has been going the way of the phone book. Drug laws are changing, and the NYPD has evidently decided the arrests are not worth the violence.

But what has affected my wife’s job most dramatically is not tactics but technology, specifically, the rise of digital video—cell phone videos, security videos outside stores and apartment lobbies, and most recently, video from police body-worn cameras. All the encounters that my wife once had to recreate from testimony and imagination are now broadcast to her second by second, sometimes from multiple perspectives.

It took the NYPD years to get used to widespread video. Initially, cops were often caught on cellphone videos insulting or cursing out civilians—minor but obvious violations of the rules—or manhandling them unnecessarily. Body-worn camera video caused even more embarrassment. When officers first started to wear cameras, they often forgot about them or forgot how they worked. NYPD body-worn cameras are always operating but are only officially recording when officers turn them on; however, when turned on they capture not only succeeding events but also 30 seconds of video from before activation. Many an officer behaving perfectly correctly after pressing the camera button was not quite so restrained in the prior half-minute.

But today my wife fields fewer of those caught-on-camera discourtesies. Officers now understand they’re always potentially being recorded. In fact, they often behave with a politeness that would have been weird or even suspicious back in 2002. My wife has watched video of officers putting up with civilians shouting the foulest insults at them. Eighteen years ago, they might well have taken revenge.

This general change in attitude is what, in my opinion, has the profoundest implication for crime fiction. Crime writers often portray cops as citizens of their own nation, answerable only to their comrades on the force and their personal code of justice. But today cops know they can’t escape society’s judgment. Any interaction could become a viral video. Just as important, any interaction could later be thrown back in their faces. In my wife’s years on the job, only a handful of times has she seen officers break down and cry in the interview room, but those have almost always been just after they’ve been shown a video of their actions. Imagine being forced to watch the worst moment of your career or even your life on a screen and then having to explain it. To submit yourself to the judgment not just of a civilian oversight board (which, let’s face it, often has little real power to punish) but of the wider world, and yourself. Wouldn’t it change how you think about your job?

I’m not sure crime fiction has yet reckoned with this change in policing. But it will have to.