Posted on November 20, 2019 by somethingisgoingtohappen

Matt Coleman is a writer of mystery and comedy who makes his Ellery Queen’s Mystery Magazine debut in our current issue (November/December 2019) with the story “Stray Dogs.” He is not a newcomer to the mystery scene, however.  His debut novel, Juggling Kittens, was recently optioned for a feature film, and he has followed that book up with two more well-received crime novels. In this post he addresses a subject that has not been touched upon much on this blog site: the relationship between true crime and crime-fiction writing. It’s a timely topic for EQMM. Due to all the great feedback we’ve had to our web-only true crime column “Stranger Than Fiction,” we’ve decided to bring the feature into the magazine. Starting next spring you’ll be able to find original true crime articles from Dean Jobb in our pages, and we’ll continue to bring you all of the columns on our website, including six true crime, web-only book review columns per year. Don’t miss it! And if you’re a podcast listener, stay tuned for the true crime podcast that EQMM will soon be launching in tandem with Alfred Hitchcock’s Mystery Magazine.—Janet Hutchings 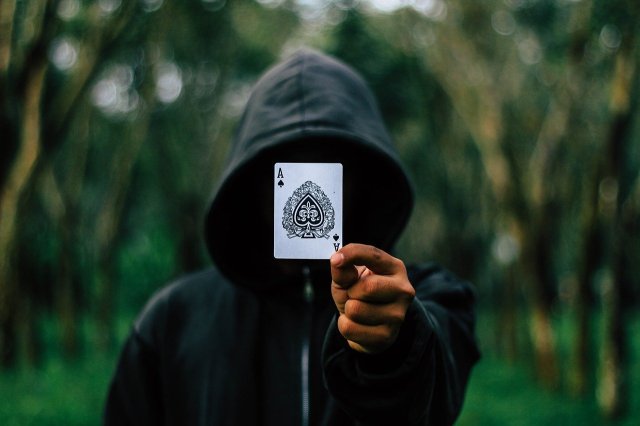 The secret to a good magic trick is never how the magician pulls the proverbial rabbit out of their hat. The real trick is getting the audience to look at anything other than the hat. The distractions. You know, I assume. Truth is, I have no earthly idea. I have never successfully completed a magic trick. Nor do I make a habit out of messing around with rabbits. I do, however, know a thing or two about teaching and a little bit about writing mysteries.

Teaching isn’t much different from magic. We spend most of our time attempting to trick kids into learning. And most of our tricks come from the world outside of school. The best teachers divine their inspiration from the “real world.” And, I would argue, mystery writers are no different. Tricks of the craft—tropes like the red herring or the MacGuffin or the mystery box—are utilized in mysteries not simply because they are convenient to a plot. They have become tropes of mystery fiction because they exist in real mysteries.

While many of us may not see these elements in real-life mysteries, that is not because they are not there. Much more likely, we don’t see them because they get weeded out in the telling. Newspapers and other media outlets are often charged with relaying the facts, filtering out the more confusing elements that, at one point, turned a tale of crime into a mystery. But one outlet preserves the narrative form of true crime. And that outlet is the true crime podcast. Like many of the best true crime books, the true crime podcast is all about the telling of the story. Which means, they are filled with all the elements of a good mystery.

Take, for instance, the MacGuffin. The MacGuffin, just to review, is a term made famous by Alfred Hitchcock. In simplest terms, it an object, person, or event in a story that exists (within the story) merely to ignite the plot. The best example in fiction is The Maltese Falcon. The “stuff dreams are made of.” The bird from the book/movie to which it provides the title is really irrelevant. But a story erupts around it and because of it.

One of the best podcast examples of a MacGuffin occurs in Bear Brook. From New Hampshire Public Radio, the podcast begins with four bodies discovered in two barrels in the woods of Bear Brook State Park. Most mystery readers/writers would never suspect the actual bodies in a murder mystery to, themselves, turn out to be a MacGuffin. But, in the case of Bear Brook, that is exactly what happens.

Between amateur sleuths and geologists and genetic genealogy and even a hot-air balloon, the story of searching for a killer becomes far more fascinating than the decades-old killing itself. And while it may sound dismissive to call human beings MacGuffins, their case led to the science used to capture the Golden State Killer. So as heartbreaking as it is to hear [SPOILER] that some of the bodies are never identified, the investigation is riveting and very, very important.

Another clear-cut MacGuffin used in a podcast shows up in the opening minutes of S-Town. Created by the producers of Serial and This American Life, S-Town follows Brian Reed’s investigation of a murder in Woodstock, Alabama. What Reed almost immediately learns, however, is that this murder is nothing more than a MacGuffin. And S-Town is no murder mystery. But what it becomes is an exploration of a true life mystery box.

As J.J. Abrams famously discussed in his TED Talk, the mystery box is that element of the unknown which, never fully opened, offers limitless potential suspense and wonder. So, in a case like the TV show Lost, the mystery box of the island only reveals a handful of its heavily guarded secrets. The real story becomes the people on the island, and their juxtaposition to the infinite suspense of that unopened mystery box allows the viewers to delve deeper and deeper into their characterization.

S-Town shows us what this looks like in real life. The town of Woodstock, and more importantly, the central character of John B. McLemore become mystery boxes. And [NO REAL SPOILER HERE] we never find out all of their secrets. But something about the endless possibilities make the journey feel like a mystery, even after we have left the murder MacGuffin way back in our rearview.

Which brings us to the hallmark of any good mystery: the red herring. The red herring is the clue meant to distract us. Best personified by the character, Red Herring, in A Pup Named Scooby-Doo, the red herring leads us down the wrong path. Just as Fred Jones always suspects Red of the crime, what the reader/viewer discovers, along with the Scooby Gang, is that Red was nothing more than a distraction. The sleight of hand meant to take our focus off the hat.

One of the classic examples of red herrings galore in a podcast is during the first season of Up and Vanished. Famous for the fact that host Payne Lindsey actually helped solve the case in question, Up and Vanished investigates the case of Tara Grinstead. While the attention Lindsey brought to the case finally helped solicit a confession, the early episodes of the podcast are rife with red herrings. A business card was left in Tara’s door, a medical glove was dropped in her front yard, and cadaver dogs hit on remains down a local trail called Snapdragon Road. These are all salacious leads, taking Payne Lindsey and his listeners down rabbit hole after rabbit hole. None of which lead to the real culprit.

An even better example may come from the second season of Catherine Townsend’s podcast Hell and Gone. Both seasons are wonderful, but the second season’s focus on the mysterious death of Janie Ward at a party gives us a textbook example of how to utilize red herrings. [MAJOR SPOILERS] Very early in the podcast, Townsend drops hints and mentions at what appears to be the actual cause of death: rubbing-alcohol poisoning. At the party, a punch was made with fruit soaked in rubbing alcohol. Janie Ward was said to have been eating some fruit. And rubbing alcohol poisoning turns out to be a highly likely and interesting explanation. But what Townsend does in her telling is cloud our vision of one interesting explanation with multiple red herrings. And, take note, each is a little more extravagant than the last, all serving to distract us from the truth. We get tales of high-school drama, a possible town cover-up conspiracy, and even conflicting autopsy reports. The red herrings are used masterfully to keep our attention, before the curtain gets ripped back and there was our culprit all along.

So while the best place to look for a clinic on writing mysteries will always be the best mystery fiction, the lessons I find myself using over and over again in my own writing often come from true crime podcasts. My recent story in Ellery Queen Mystery Magazine, “Stray Dogs,” pulls heavily from a local unsolved mystery and multiple bits and pieces from podcasts. I am obviously going to make you read it to look for evidence of that fact. You know, if it’s even a fact, at all. Look at anything other than the hat, and all.