“Rock ’n Rail: Take the Quiz, or, The Peak Hour Commute Seen Through the Eyes of a Mystery Writer” (by V.S. Kemanis)

Posted on November 1, 2017 by somethingisgoingtohappen

V.S. Kemanis has had a varied career in the law and the arts. As an attorney, she has been a criminal prosecutor, a civil litigator, and the supervising editor of decisions for an appellate court. Her short fiction has appeared in EQMM and elsewhere and was collected most recently in 2017’s highly praised Love and Crime: Stories. She is also the author of the Dana Hargrove legal mysteries, a series described by reviewer Jon L. Breen as “a law buff’s delight.” Recently retired from the practice of law, the author expects to have more time for her fiction, and has a new Hargrove novel due for release in January. But as we see in this post, the daily grind of commuting to a day job is never entirely unproductive time for a writer.—Janet Hutchings

“All aboard!” bellows the Tom Hanks–handsome conductor as he swings out from the door. With a whooshing release of steam, the train chugs out of the station. You relax into a spacious window seat, mesmerized by the beautiful rush of hill and dale, letting the gentle rock and clack-clack of the rails lull you into day-dreamland.

Not quite. Were it only so. Having recently retired from my legal career at an appellate court, I’m inspired to reveal the painful details of my years of peak-hour commuting (read that “working”) on Metro-North Railroad, a.k.a. my second office for reading and editing appellate decisions. Now that I’m blissfully free of that pressure, I take the train to NYC for purely pleasurable activities and enjoy the latest issue of EQMM on the way!

If you’re a fiction writer with a day job, you know that every spare minute presents the potential for a writer’s exercise or story idea. Let me offer a few here. Take the quiz! All choices marked (a) (b) and (c) are taken from true life experiences. You’ll find the answers to the quiz at the end. (If I knew how, I’d print the answers upside-down).

Monday, 5:30 a.m.: In your suburban bedroom, the radio alarm, set to a local station at maximum volume, blasts you awake.

I. Which is the worst? (a) “Cake by the Ocean”; (b) Dr. Z___’s commercial on the duodenal switch procedure; (c) transit report of a thirty-minute delay on Metro-North due to police activity at the Harlem-125th Street station.

Story idea: Manhunt for the killer of a suburban gastroenterological surgeon ends with the arrest of a disgruntled bariatric patient (eating cake on a Metro-North train), as he alights at the station to make a second surgical consult in NYC.

II. Which is the worst? (a) a clueless passenger yelling repeatedly into his cell phone “I’m on the train!”; (b) the creepy, red-faced maniac who stands up and yells into the clueless passenger’s face, “THIS IS THE QUIET CAR!”; (c) your realization that it wasn’t so lucky after all to grab the last available aisle seat because your seatmate is a twitchy, heavy snorer who placed a full cup of coffee on the empty spot between you before falling asleep.

Story idea: Horrified wife, on the other end of the call, overhears her husband being assaulted before his Smartphone gets thrown across the aisle and doused with coffee; the assailant flees at the Harlem-125th Street station but is later apprehended based on the wife’s positive voice identification of her ex-husband.

A few of the local residents at GCT

III. Which is the worst? (a) tiptoeing around the pigeons and their droppings on the way to the facilities; (b) being scolded by the bathroom attendant [“this a public bathroom, honey, it ain’t your home”] when you balk at entering the only available, less-than-desirable stall; (c) wasting five minutes and a-full-tree-branch-worth of little bits on the floor trying to get sufficient paper from a ten-pound roll of single-ply tissue designed by a tree-hugger of low intelligence.

Story idea: In the wee hours of the morning, the bleeding victim of a mugging regains consciousness inside a locked, “out of order” toilet stall in the bowels of Grand Central and sends an SOS message on a tissue tidbit tucked into the wing of a carrier pigeon, reaching the bathroom attendant as she starts her shift, saving the victim’s life.

Paper for possible use in SOS 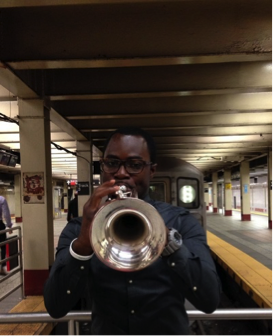 Story idea: Just a reminder to use music in your next short story to set the mood.

V. Which is the best writer’s exercise to undertake in a crowded subway car for improving your descriptions and characterization? (a) study the placement of features and the sizes and shapes of heads, eyes, ears, noses, and mouths of the people around you (or the thighs and knees of the people standing in front of you if you are sitting); (b) observe the characteristics and behavior of mentally ill people; (c) memorize the techniques and pitches of panhandlers.

Jot your idea for a writer’s exercise here:

Then you do a full day, and it’s time to go home.

VI. Which is the worst? (a) tripping on a pothole and falling in a Brooklyn street next to the subway entrance and manning up for the full two-hour commute home in horrible pain as your left wrist swells to mammoth size because you’ve broken it despite telling yourself, “I’m OK”; (b) being stuck in the tunnel under the East River for twenty minutes due to “sick passenger at 14th Street” knowing you will miss the 5:53; (c) arriving at the GCT subway stop with five minutes until train time, which is completely doable if you have a straight shot up the two flights of stairs and across the concourse to track 34, but a wall of bodies inhibits your progress, and the train pulls out as you step onto the platform, the smiling conductor leaning out the window.

Story idea: Murder suspect, on the run, sick with guilt and fear, gets off at GCT station, and in his haste up the stairs, pushes a woman who falls and breaks her wrist; the crowded concourse inhibits his progress, and the woman points him out to the police, who arrest him for assault, not aware that they’ve fortuitously caught a murderer. [I used this scene in my novel Homicide Chart]

On the 5:53 (or 6:15, depending on VI): Slightly headachy and nauseated from stress and fatigue, you look for a seat in the Quiet Car® for an hour of work on the way home. The rules of the Quiet Car®, however, do not include a rule against eating or drinking.

VII. Which type of food stinks up the Quiet Car® the most? (a) McDonald’s French Fries; (b) Chinese beef with broccoli; (c) a 25-ounce beer and humongous bag of Zaro’s popcorn.

Stay away from this man to avoid an hour of noisy, odoriferous commuting

7:15 p.m.: Home sweet home! A quick dinner, and two or three hours remain to work on the current novel before bedtime.

And so, there you have it, fun and productivity from pain. Feel free to steal the unused story ideas—I was too busy at the Court to develop them, and now I’m immersed in the final chapters of my current WIP, the fourth Dana Hargrove legal thriller. It’s a whole new world, retirement from the day job—I’m in writer’s paradise.

Answers to quiz questions I – VII: All of the above.

2 Responses to “Rock ’n Rail: Take the Quiz, or, The Peak Hour Commute Seen Through the Eyes of a Mystery Writer” (by V.S. Kemanis)