Posted on September 4, 2013 by somethingisgoingtohappen

Two weeks ago, when Mark Evan Walker posted about his career as an illustrator, I mentioned that he is also a knowledgeable fan of crime and mystery fiction. This week he shares with us some reflections on a character who’s barely remembered nowadays, but who dominated the mystery scene for several decades of the twentieth century: Michael Shayne.—Janet Hutchings

Above is one of many Michael Shayne covers by renowned illustrator Robert McGinnis for Dell Publishing. The iconic face of Shayne was done by another noted illustrator, Robert Stanley, who also provided many memorable Shayne covers.

This is exactly what I remember as a youngster from the supermarket check-out line or the circular paperback rack at Moreland’s Drug Store. The illustration shows the genius of Bob McGinnis: Whether the model’s hair color matches the girl in the story, or is even in or has any relationship to the story, is totally irrelevant. It smacks you right in the face. It’s brazen, jaw-dropping pulp. It’s innuendo. It says, “Read me, Baby, and I won’t let you down…”

And that’s pretty much right when it comes to Michael Shayne.

Below, another wonderful Dell “Keyhole” cover from the forties: 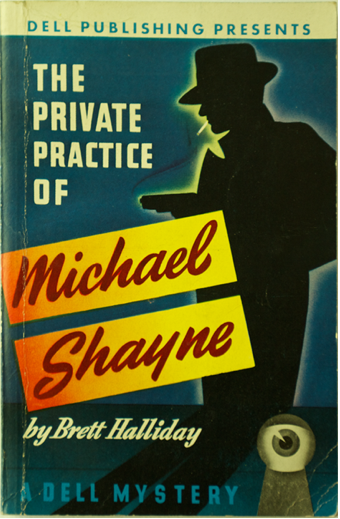 It’s surprising that Michael Shayne isn’t better known today, yet Brett Halliday’s two-fisted hard-drinking, hard-thinking private detective is certainly worth rediscovering. Perhaps in today’s world of CSI and forensics it might be easy to poke holes in the plot, yet taken in context, and with the police work at the time these were written, they come off quite well and are highly entertaining page turners. In my own children’s mystery The Case of the Blood Red Stars: A Kelly Riggs Mystery, the final chapter title, Blood on the Stars, is an ode to Michael Shayne and Brett Halliday (pseudonym of Davis Dresser) and the fifteenth Shayne novel—which is where the specific idea came from for my own plot’s “McGuffin.”

Described as tall and rangy, with coarse red hair, bushy eyebrows, and a corrugated forehead with deep trenched cheeks, Michael Shayne operates primarily from his apartment hotel in Miami, overlooking Biscayne Bay. Though some of the novels take place elsewhere, places such as El Paso and Colorado, the Miami settings are the most memorable and evocative. Halliday puts you right there with his mood-filled descriptions and it’s easy to transport yourself back to another era, when there was more open space, less traffic, and you could smell the bougainvillea and fresh sea air.

A Dell “Map Back” from the forties, here showing the geography of Biscayne Bay, sandwiched between Miami and Miami Beach.

As you read, it’s always amusing to see how quickly, and by what page, Mike will take his first (of many) snorts of cognac—his favorite beverage—and this being fiction, he consumes more liquor in one sitting than is humanly possible. In fact, all the Michael Shaynes stretch credulity to the limit, but then that’s part of the fun.

The series featured a regular cast of recurring characters. Described as lean like a racing hound, tall, gangly reporter Tim Rourke is Mike’s best friend, and helps him in various ways to solve some of his best cases, whether he’s running down facts in the newspaper’s clipping “morgue,” being a sounding board over drinks, or in one case—transporting a body that refuses to go away—getting too close to the truth and narrowly escaping death. 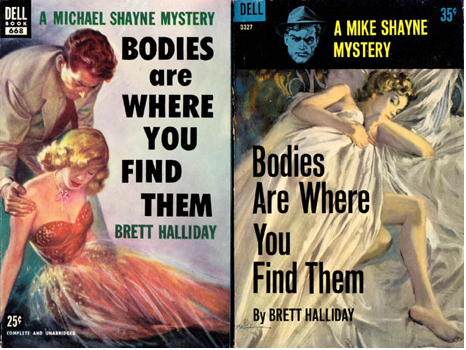 Shayne’s main antagonist is Miami Beach Chief of Detectives, the dapper little Peter Painter. Halliday’s description of Painter is so perfect that it’s always a pleasure when Shayne comes up against him and ultimately outwits him. On the other hand, Shayne has an ally on his side of the bay in Miami Police Chief Will Gentry, a big, florid, solid cop who lets Mike Shayne go the limit, and always seems to have his back.

In his first case, Dividend on Death (1939), Shayne meets a young debutant, Phyllis Brighton. He encounters her again in the next novel, and this time they fall in love, though Shayne is fifteen years her senior. They marry, but Halliday had a difficult time working a married Shayne into the action, and when a lucrative movie deal came up it was decided Phyllis should be dropped from the series. She dies tragically in childbirth, and the child also succumbs. 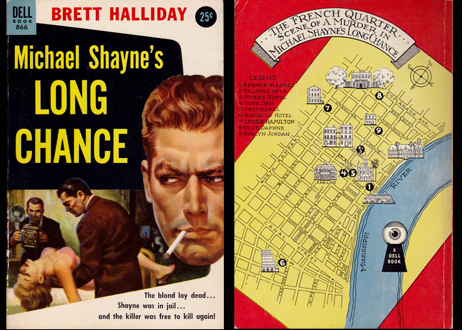 The tone of the series definitely changes at this stage, with Shayne leaving Miami for New Orleans in Michael Shayne’s Long Chance, (1944). There, he meets a local girl on his first case, Lucy Hamilton, who goes on to become his faithful secretary. After a couple of novels they return to Miami. Their relationship is complicated, and though they do mix business with pleasure, they do not sleep together. Lucy Hamilton is a wonderful character, and the complexity of her relationship with Shayne lends another layer of interest behind the mysteries.

Michael Shayne was featured in mass-market Dell paperbacks for over three decades, with millions of copies sold worldwide. In 1955, Dresser created Michael Shayne’s Mystery Magazine, which went on to run for some thirty years. Halliday retired from writing full time in the late fifties, and subsequent novels were ghostwritten. This worked well for several years, but by the early seventies, the character of Shayne had become somewhat harsh and wooden at the same time. Also, Lucy Hamilton was dropped from the series so Shayne could become more of a cold Bondian-styled bed-hopper. I much prefer the earlier Halliday-written novels and the series up through the mid sixties.

As an illustrator and mystery writer and fan, Robert McGinnis is one of my heroes; I have collected his work along with many others whom I totally dig over the years either in paperback or filed digitally. Here are some more great Dell Shayne covers by McGinnis: 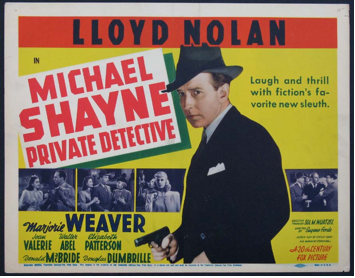 Michael Shayne has been all over media. In 1940, Twentieth Century Fox bought the rights, producing seven films starring the always reliable and likable character actor Lloyd Nolan as Shayne. Nolan plays up the Irish blarney, and he’s great in the role. Despite almost total deviations from the novels, these are quite well done and entertaining little mysteries. In 1946, Fox dropped the series, which was picked up by poverty row PRC (Producer’s Releasing Corporation), which cranked out five more much cheaper productions starring Hugh Beaumont (Leave it to Beaver).

Shayne was on radio during the forties and fifties, played variously by Wally Maher and screen actor Jeff Chandler. Then came the 1960-1961 hour-long NBC TV series starring Richard Denning in 32 episodes. My grandfather really liked this show and I remember it from my childhood. You can watch an episode now at TV4U.Com on the Detective Channel.

Interesting factoids: In addition to Michael Shayne, Richard Denning played on two other crime shows, Mr. and Mrs. North, and as the governor on the long-running Hawaii Five-O. Lloyd Nolan played TV detective Martin Kane in the fifties.

My own Kelly Riggs mystery owes a huge debt of gratitude to Brett Halliday and Michael Shayne. Revisit this great series yourself!

Part of detection is making connections.

4 Responses to “Call for Michael Shayne” (by Mark Evan Walker)